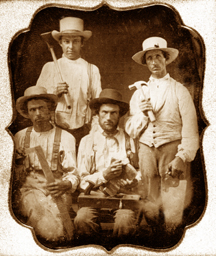 These are the men who made the Miner's & Business Men's Directory of 1856. It is without a doubt that by the publication of this directory more had arrived and some of these had left. These are men who listed that profession. Countless others had basic carpentry skills and may never have applied them to much more than to enhance their living conditions.

Janning, I. from Tennessee.

Sampson, B. C. from Massachusetts.

Sears, A. from Vermont.

White, J. B. from Tennessee.

NOTE: Any information on these men to be placed here would be appreciated.

The 1860's census actually has many more individuals who were carpenters. One such fellow was John T. Bonnell as a carpenter/cabinet maker in Columbia prior to the 1860 census.