Forgotten Buildings is what Mrs. George W. Eastman called her compilation as she described (in 1954) what was here: Broadway West: 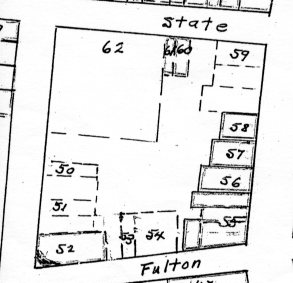 1850 - Columbia Exchange Hotel (#62) AKA Saloon, Threare, Restaurant & Garden. Built by C. Hoerchner (G & B Eastman 1958) Thomas Nugent Cazneau owned and operated the Columbia Exchange. In this theatre performances ranged from both ordinary entertainment to high class events which may have included opera. "Discriptions of the Columbia Exchange strongly suggest that it was...a frame building." (Barbara Eastman - 1971)