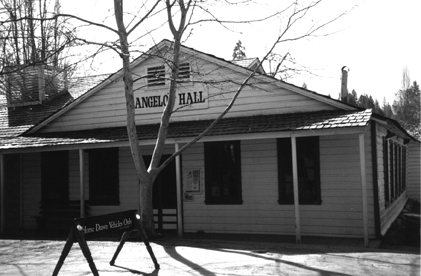 The current structure (Angelo's Hall) is on lots 14, the east half, and 13, the west half. Ever since the 1960's the folk operating the restaurant in front have shared control of the Hall with the state for special events.

1856 Hoerchner puts up a brick building.

1857 October - Hoerchner sells to Charles Joseph for $1395. Joseph has a shoe business.

1864 December - Joseph sells to P. A. Campbell for $205. He moves his bakery into the building. A little later he purchases a lot and frame building east of his lot, forming lot 14.

1880 By this time, James Schooler owns the building.

1896 After Mace's death in September, the lot sells to William Seibert.

1920 The lot sells to the Native Sons of the Golden West.

Originally taken up by John Esaw and company and occupied by their Chinese restaurant.

1854 July - the building burns and is replaced with another frame structure . It sells to Morris Michael on July 31.

1855 Michael sells the west part of the lot to John and Philip Fauble, butchers.

1858 September - the Faubles sell to Jacob Smith who opens the Miners' Market in the building. A month later he changes the name to the Washington Market.

1861 September - Adolph Alisky advertises a business in the building.

1865 January - Rosenfield sells the frame building and lot to P. A. Campbell.

1880 This property belongs to James Schooler.

Now for the east half

1856 On the same day Rosenfield sold the west half, he sold the east half to Isaac Levy.

1856 October - a furniture store was in residence.

1859 October 13 - Cornelia M. Towle, wife of Robert Towle, opens a book and stationery store as a Sole Trader, declaring her right under the law of April 12th, 1852, using her own money of $5000 for "buying and selling Books, Stationery and Merchandise." - Recorded (this date) by request of Robert Towle.

1861 Isaac Levy sells to his brother Joel who joins the lot with the corner lot.

First appears to be owned by Joshua H. Sykes and was 30 feet wide by 120 feet deep.

1855 May - Leisy sells the lot with 2 frame houses to Charles Julius Hoerchner.

1855 December - Hoerchner has completed a one story brick building on the west part of the lot which houses his boot and shoe business. The east part is a wooden building occupied by E. Seidel as a shooting gallery.

1857 October - Hoerchner sells the brick building to John Leisy for $1275. Four days later Leisy sells to Ignace Christen for $1325. Christen moves his paint and paper hanging store into the building.

1867 After journeying to the Fraser River and returning, there is no further mention of Christen's business in the building after this date.

1878 November - Charles Koch owns the lot and tears down the brick building in preparation for mining the lot. He sells the brick and iron doors.

1881 Henry Kluber acquires the lot by this date, sold in May to Henry Kruse who in turn sells to William Henkelman. He puts up a frame building into which he moves a saloon with reading and lounging room.

1897 The property sells to William Seibert.

1920 Mrs. Seibert sells the property to the Native Sons of the Golden West, the building had burned.

1948 February - the state purchases the building from Pete and Barbara Nadotti for $7,000. That price includes the Columbia House. 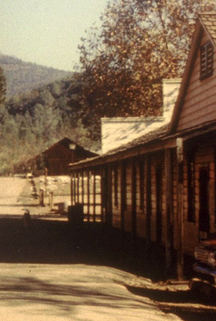 State Street looks bare in this c1970s image of the Angelo's Hall on the far right.

2010 May - Briggs Hospitality assumes control of the Hall from the state.

2012 June 1 - Steve and Doreen Kwasnicki are running the Angelo Concession.

2013 Angelo's is open for meetings and special events.