Today (2012) this lot is empty and sits open to the east of the brick building called the San Francisco Store.
(left of red bldg in image above - northeast of Broadway and west of Main Street)

1851 Bernard and Cheminant first own the lot.


1852 Bernard Brothers had the Union Restaurant on this lot.


1855 June - Fire burns all wood structures and does future damage to brick walls.

1855 Saturday - William H. Newell and wife mortgage to B. M. Brainard for $1235.00 for a parcel of land and a brick building on the north side of State St. next east of the two-story brick of Dr. James McChesney.


1857 August - Fire burns all wood structures and does further damage to brick walls. 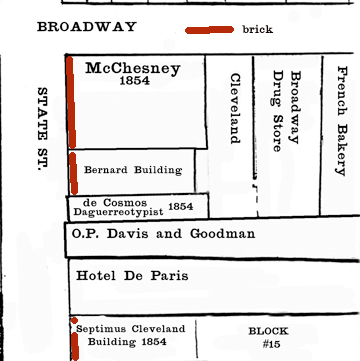 A map showing some of the buildings from Broadway to Main street - 1854.