1851 December 24 - Charles W. and Lewis Gillett of Sonora sell the lot to Septimus Cleveland and James H. Gardiner for $600. At that time the house and lot were known as lot 36 (Joel Levy lot), there was also a corral at the back of the lot

1852 May 24 - Cleveland and Gardiner sell to Rudolph Mollenhauer, R. J. A. Plump and Edward D. Schultze for $1000, the sale is described as: lot no.36 at the corner of Main and Fulton Streets and a certain other place in the rear of said premises used as a corral or yard and described as fronting on Fulton Street 80 feet and running back of said lot 36 with equal width and parallel with Main Street 80 feet.

1853 April 18 - N. Arni, administrator of Theo Boylan, deceased, deeds to Arni for $60 the house and lot on Fulton street in front of the ampitheater near the reservoir, belonging to the deceased.

1854 At some time the lot is divided into 2 lots with frame buildings erected after the fire. On the west lot, a 2 story frame structure was built after the fire, it had The Clipper office newspaper on the lower floor and rooms for rent on the upper floor. The east lot is 18 ft by 80 ft. When Chamberlain becomes Justice of the Peace in October, he occupies this house as his courtroom until October, 1856. It stays as rental property: lawyer's offices, etc. John Heckendorn was occupying the lot at the time of the 1854 fire, but is not assessed as owner until 1855.

1854 May 13 - Columbia Clipper is printed by W. W. H. Gist, John Heckendorn, William A. Wilson. Organ of the American Party. Located on Fulton Street, near Main.

1855 August 1 - John Heckendorn sells to Charlotte O'Hara (wife to restuarant owner William O'Hara of the Jenny Lind) for $150 a certain house and lot bounded on the south by Fulton Street, on the east by a town lot owned by the New England Water Company, on the west by a lot owned by Heckendorn, being 18 feet wide and 80 feet deep

1857 August 12 - Heckendorn sells the adjacent lot on the west to William O'Hara of the Jenny Lind Restaurant. His advertising discribed the building as 25 ft by 50 ft and 2 stories high. Since closing The Clipper, which had been published from this building in early 1856, he had been renting the rooms for sleeping or offices.


1858 This map shows #8 (Columbia Clipper office and Heckendorn's residence) and #9 (First New England Water Company Reservoir - wooden - office next east) of the Biddle house property. The house east on corner of Fulton and Columbia Streets is the property with Koch's cabin (known as the "cat house" due to cats living there. - current era).

1871 April 25 - P. B. Bacon insures a wood frame store with Duchow. His residence is on Green street. He also operates the post office while in this building.


1903 June 3 - Hale sells to Vassallo for $120, his half interest, with the dwelling house and other buildings

1907 November 3? - Vassallo sells to A.J. Sartoris, his son-in-law, for $10, all that certain lot known as the "Bacon lot" fronting south on Fulton Street between Main and Columbia.

1929 June 27 - Sartoris gives to his daughter, Marie S. Martinez, "for love and affection" that lot and various other lots.

1980 July 12 - John Raymond Stevenson is born in the house. The son of Kent and Maragaret Stevenson.

1991 Purchased from Mrs. Christine Martinez and her daughter Mrs Christine Gawley for $95,000. Replace roof and porch. Museum tech Diana Newington does extensive research on wallpapers found in the house. She discovers 1857 newspaper on a wall in the back bedroom. 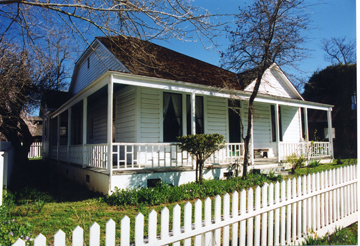 2003 - There was a $5000.00 interpretive plan for the Martinez House which had been written with funding requested. T-shirt sales and small donations had been the mainstay of the project. The plan included many rooms that would tell the story of the house's growth from 1850's shotgun design to the 1920's kitchen. The project needed $30,000 to finish. It would be a wonderful display of the lifestyles over the 60 years after it's remodeling.

2003 - There are a few boards that cause some interest in the house. Delivery crates had been used in the construction of the Biddle 1850's "shotgun" designed house. 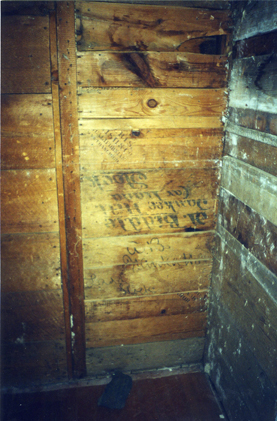 Crates addressed to various locations show these cryptic words from top to bottom:

(right side up written is)
A.B.
Yanka Wo(?)
Ladd
Stock

2019 December - Nothing further has been accomplished at this writing. 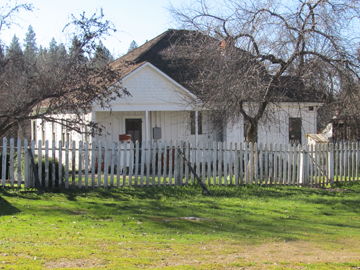