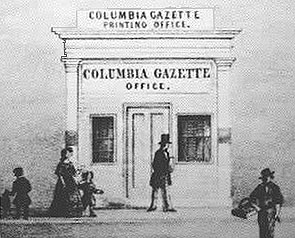 The following is a study of The Columbia Gazette: longest running paper of Columbia.

1852 Walter Murray claims the lot and owned a wood building. (Originally the lot is where the Ice Cream Parlour now stands. The building in the middle of the current Fallen complex.) 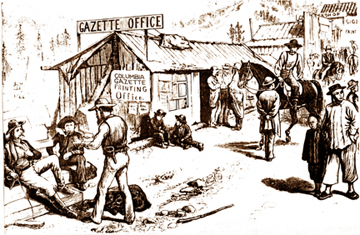 1853 March 5 - Office in the McClenhan House where present Gazette building is today. (Also on this lot was the Ticonic Hotel. Dates unknown.)

1854 Duchow and Yancey own the lot. W.C. Parker had a booksellers & stationers in the building.

1854 July 10 - at 2 o'clock in the morning H. "Babe" Crowell started a fire at the corner of Broadway and Washington Streets, so that Columbia wouldn't be left behind from all the other conflagrations. The building is lost. **

1855 The new one story Greek Revival building is built and Duchow & Steele are now the owners. Lithograph is created of the Columbia Gazette Office. It was most likely the best new building on the street.

1855 (months later) - They add a second story to the wood structure. The print shop is in the second story.

1855 November 10 - The first issue of The Columbia Gazette and Southern Mines Advertiser is printed.

1856 April 5 - Isaac Shotwell owns the building. Casneau and Steele, printing a newspaper with the Gazette title again. Duchow and Carder take over the paper and move it to Main Street.*

1856 August - Gilbert Beach moved the Broadway Bakery and the Temperance House into the building.

1857 August 25 - a Chinese cook starts a fire by accident around 6 o'clock in the evening that took out the wood buildings from Pacific Street north to Maine Gulch south and from Columbia Street east to Broadway west. 13 blocks lost (see map of area destroyed) as well as six lives. The building burns. "The material of the Gazette was saved, but the building was burned." - (from the Sacamento Daily Union August 29, 1857, quoted from the Columbia Courier) The building is soon rebuilt of wood and is two stories. Architectural design not known.

1858 Spring - J. Wing Oliver takes over for a few months. His paper is against the Administration. It came out for Douglas against Lincoln.

1858 July - George R, Parburt put the paper back on track for the Administration.

1860 August - Cardinell with the help of Fallon, builds a two story building of brick. (How it looks today.)

1863 Owen Fallon buys the building and pierces the wall to form a single unit with his building. The second floor is a ballroom (upper floor).

1886 The ballroom of the first floor of Cardinell's structure is converted to a bar. The second floor becomes a ballroom.

1891 Conlin Remodels the front door and forms a vestibule and archway.

1966 Columbia Gazette Office is built on Washington Street from a 1855 drawing of the façade. Downstairs museum opened.
This reproduction of the 1855 building is constructed "three lots" east of it's original site for $33,000 after buying the lot for $1 from the University of the Pacific. $12,500 was contributed by the California Newspaper Publishers Association.

2000 March 28 - Columbia Booksellers & Stationers at the Columbia Gazette. A working print shop is set up.

2006 March - Columbia Gazette Office is returned to an interpretive center to display a working print shop with volunteers and docents. Columbia Booksellers & Stationers moves to Main Street, in the Franklin-Wolfe Building.

2018 Feb-March - Columbia Gazette gets a new facade face lift. Signs are being made to match the 1852 design, replacing the incorrect 1966 font that was used. 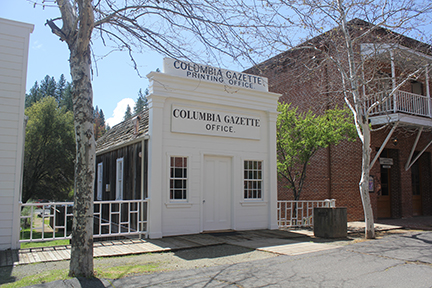 A quick look at Columbia's Newspapers.
A detailed breakdown of Columbia's Newpapers and Printing Offices and their Publishers/Editors.