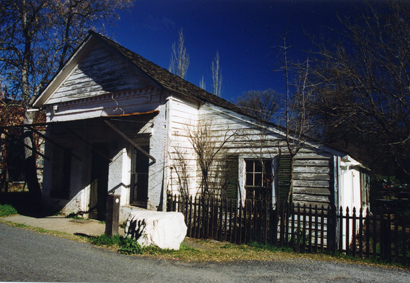 The building is one of the few remaining French “houses” in Columbia. Almost all of the historic buildings were called “houses”; the front room was the commercial space while the business owners might live in the back (or upstairs in the case of the two-story buildings). This building was listed as a contributor to the NHLD as the “Italian Saloon” but its original owners and tenants from 1856 until 1864 were French immigrants.

1852 - Ship's Captain Timothy Haley arrives in Columbia and buys the subject lots. His wife Betsy starts the first English-speaking school; it lasts for several months (Alley 1882:109). They have a garden, perhaps the first commercial vegetable garden in Columbia on and/or immediately north of the building lot (Eastman n.d.), and are assessed for $150 of improvements (Tuolumne County tax rolls). Judging from the amount, they probably built a small, split board house with a puncheon floor (Wilson 1936:2).

1856 summer - there is a one story brick and stone structure on the lot. Supposedly Madame Louis, French Laundry. 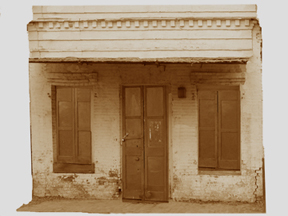 1857 August 25 - town fire started next door, reportedly in a Chinese dwelling, on a lot owned by a Frenchman known as Aime Bonnifoi. According to local histories, a Chinaman “cooking his supper ran out into the street to see what a commotion was and returned to find his cloth walls on fire” (Welts 1973:2)

1857 a two-story building with a stacked rock foundation/cellar or ground level is built on the subject lot, northeast of the stone store. The upper level facing west had board and batten siding, gothic windows, and a steep narrow staircase (this building was in ruins by the 1960s) (Eastman notes, CSHP RF; 1859 tax records $900 improvements).

1858 Louis Braquehai was assessed for property taxes on two lots and $1,000 worth of improvements on the north side of Jackson St., east of Main indicating that they rebuilt right after the August 1857 fire. The description of their property in a court case describes the whole NW corner of Jackson and Columbia Streets (120 feet x 120 feet). The 1858 tax record lists the brick-façade building as a "one story brick building" and the assessment includes "other frame houses" on the large (.71-acre) corner lot. While further investigation may reveal more than a brick façade, fireplace, and pass through from the original 1856 brick building, views from the attic and in two spots in the interior walls indicate there are three 1857 stone masonry walls and a brick façade.

1860 the Braquehais borrowed $900 from fellow Frenchman John (Jean Marie) Potier and bought 160 acres seven miles east (north-east) of Columbia bordered on the south by French Creek. Apparently, they had to sell 2/3rds of the French Creek land to pay off the loan, but were able to repurchase up to 160 acres by selling their Columbia property in 1864 (County Deeds and Court Records) Louis became a U. S. citizen in 1869. He is listed in the Tuolumne County Great Register of 1880 as a farmer from France, age 52, living at Italian Camp. He died in 1881. His widow Irene was Administratrix of the estate branch and left the county in 1882. Their former Columbia property became a grocery store before it became a residence in the late 1800s.

1861 A gable roof is added to the flat roof on the primary building ($700 improvements noted in 1862 for two lots owned by Louisa Braqueha [sic]).

1864 Pietro Beronio buys the Jackson Street property from the Braquehais.
The Italian owners of the subject property from 1864 to 1875 were Pietro (Peter) Beronio, Joseph Pratto, and then Nicolo [Nicola] Gallo. Peter Beronio was a grocer who owned the small brick building behind the Knapp Store on State Street from 1858 until 1863 (Kimbro 2000:14-15) There were several Gallos in Tuolumne County in the 1870s, including Nicola, Giacomo, and Antonio (Tuolumne County Archive) If the local oral history is correct, one or more of these men ran a saloon in the subject building. Known as the Italian Saloon.

1871 Joseph Pratto and Antonio Raffo own the "old stone store" and corner lot.

1871 Pratt[sic] still owns lot 8, according to the Beauvais (Dart) town map by the Tuolumne County assessor. Two buildings are on the lot at that time.

1882 Irene Braquehai sold the land to M. Fahey for $600 and that's the last time she appears in the county records (TCHS/Paquette's FRENCH Index).

1898 Herman and Emma (Kress) Schmidt owned the property and it became their residence. Her son from a previous marriage, Bert Yuill, age 15 in 1898, probably lived with them. She inherited water rights to spring(s) in Matelot Gulch and made a living in part by selling water to other townsfolk. Herman was a ditch tender on the historic 5-mile ditch that brought enough water to Columbia in 1858 to allow hydraulic and placer mining in Maine Gulch (later renamed Columbia Gulch and now the main parking lot for Columbia State Historic Park, three blocks south) (family letter in CSHP Archive). 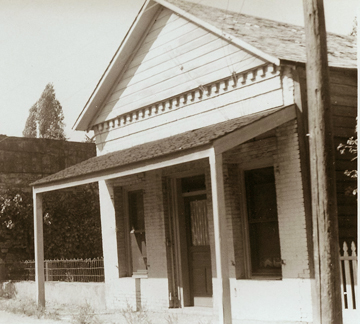 1941 Sept 18 - Harry and Kate Peters sell to Robert E. Burns. This may be the Fallon Hotel if so then Felicia B. Schnapp to Robert E, and Grace W. Burns in 1946, Jan 25, Vol. 31 page 30. This property is associated with the campaign to preserve Columbia as a historic park. Dr. Robert E. Burns (who later became the College of the Pacific President and a State Parks Commissioner) and his wife Grace W., purchased the subject property and the Fallon Hotel complex in 1941 to preserve them. Together with Sonora dentist Dr. James McConnell and his wife Geraldine, the Cavaliers, the Segerstroms, and other members of The Historic Mining Town Preservation League, they raised the necessary $50,000 in matching funds, support from State Senator Jesse Mayo (of Angels Camp), and from California Governor Earl Warren and the California Legislature to pass the legislation that established the historic state park in 1945, saving Columbia from almost certain destruction (OSA scrapbook CSHP Archive; Sweeley, personal communication 2007; Cassel 1995:105). Dr. Burns chaired the Master Plan planning committee for Columbia State Historic Park in 1949-50. And, in 1953, Dr. and Mrs. Burns hosted a luncheon in their garden on Jackson Street, after a meeting at the Presbyterian Church of the 49er, to plan the first California Historical Society annual conference (Lyon 1991). 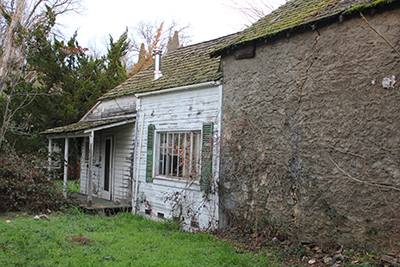 1952 Being used by the College of the Pacific (University of the Pacific) summer theater group. Demarcus Brown, director of the company, lives in the cottage with his wife Lucy and daughter Marsha. Lucy and Demarcus plant gardens. A wood cabin on a rock foundation is still present.

2001 Used as a maintenance office.

2004 DGS moves out; the building is used to store lumber, tables, chairs, etc. 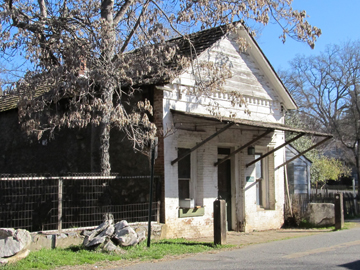