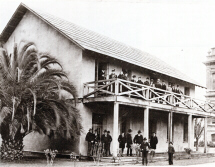 San Jose was the first state capitol building. A two story adobe hotel just 60 by 40 feet in size. The top floor was for the Assembly and the bottom floor was for the Senate. The first and second sessions of the legislature were held here. The legislative members, though, were not happy with their accommodations. They began to grumble immediately and many wanted to remove the capital from San Jose. During the 1850 session, there were many offers of land for the state buildings along with funding for construction. The most promising offer was from General Vallejo. On 22 April 1850, an act was passed for the Governor to present to the public a new location for the state capital. The election was held on 7 October 1850 and the change was approved. 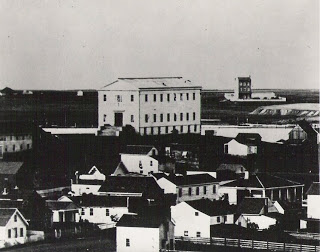 
When the third session of the legislature convened, the capital was not ready. Workmen were still working to complete the buildings. Much of the furniture, fixtures, etc. were not in place with many not even delivered. The site is marked today by a bronze plaque on the corner of York and Sacramento Streets. Most other buildings in town were in an unfinished state as well. The steamer, Empire, housed around 250 people at the time, 50 of which were legislators. Once more, the facilities were less than optimum and efforts began again to change the location of the capital. Though workmen were attempting to finish their construction and others were trying to provide the necessary conveniences; legislators felt the contract with General Vallejo had been broken. A compromise was settled upon to help keep the peace. The state capital would remain in Vallejo, but the legislature would move to Sacramento to complete the session. The next year, on 3 January 1853, the Fourth session began. Conditions had improved, but the weather was poor. Because of the lack of good roads which became difficult to navigate due to the weather and poor communication, an offer by Benicia for free use of their city hall and port of call on the river was accepted. A bill was passed on 4 February 1853 calling for the immediate removal of the seat of government to Benicia. 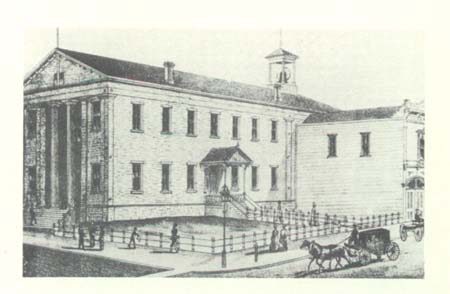 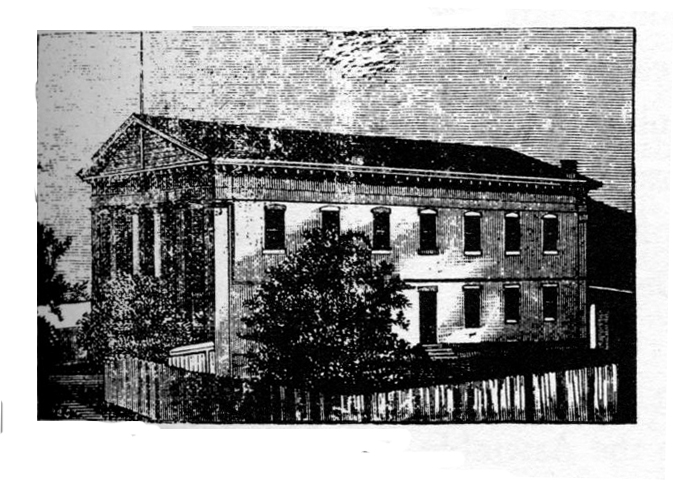 Benicia happily welcomed the legislature when they reconvened on 11 February 1853. Because of the addition of an ordinance depot and a military post, Benicia, named for the second name of the wife of General Vallejo, had grown rapidly before being named the state’s third capital. The Capitol building, itself, was a two story brick building with two large rooms for the legislative chambers and many smaller rooms for the many committees. The entrance to the building was appropriately grand with large columns and pillars. The session was continued with little complaint until it adjourned 19 May 1853. When the Fifth session began on 2 January 1854, it was reported that over 100 men had no place to sleep except in saloons and once again talk began of a change. It was about this time that the city of Sacramento made a generous proposal. They offered the spacious Sacramento County courthouse, many additional rooms, a fireproof vault and free moving for all legislators and belongings as well as the furnishings. They also included a building site for a new capitol building. The offer was accepted and on 25 February 1854, Governor Bigler signed the bill calling for the new state capital to be at Sacramento. The very same day, everything was loaded up, legislators, governor, and all the baggage, onto the steamer, Wilson G. Hunt, for the voyage to Sacramento. 25 February 1854 to present 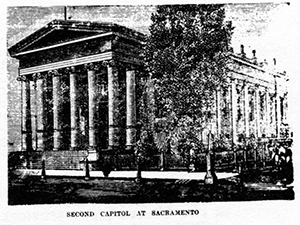 The new courthouse had been completed in 1851. It was a wooden two story building with four columns in front which supported a balcony. Sacramento was growing by leaps and bounds with more than 55 hotels alone. All forms of transportation were available at this time from buggies to steamboat service on the river. Legislators were excited to at last have a permanent capital. There were plenty of facilities to house all the people who helped to run the government for California. It was unfortunate that just after the end of this session, on 13 July 1854, a fire destroyed the courthouse and much of the city itself. On 27 September 1854, a new foundation was laid. This site for the first two buildings is now the site of the Sacramento County Jail. Designated as State Historic Landmark No. 869.

This second building was completed in January 1855. The front of the building had eight large fluted pillars. The second floor was 80 by 120 feet which provided plenty of room for both the assembly and senate meeting rooms plus other necessary offices. The ground floor also had offices, plus fireproof vaults for the Treasury. Work began on the permanent capitol building. The public square located at 9th and 10th, I and J Streets was the donated area for the new edifice. Work began in December of 1856, but was stopped by the courts and never resumed. At this point, there was much discussion over the location of the state capital The State Supreme Court actually ruled the capital was still San Jose, but later reversed itself. Other prominent cities, including San Francisco, Oakland and San Jose made proposals to be a capitol site, but in 1860, Sacramento once again won out with the area between L and N, 10th and 12th Streets. A construction fund was appropriated and a commission appointed to begin the new state capitol. 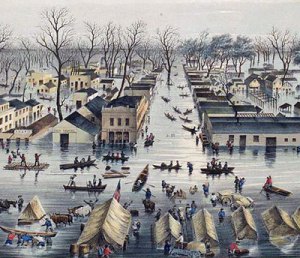 Sacramento Fooded
San Francisco (Temporary)
24 January 1862 to 15 May 1862
When in December 1861, Sacramento became completely flooded and many spoke of temporarily moving the capital to San Francisco, but nothing was done. Then, again, on 10 January 1862, the city was inundated even 20 inches higher than the previous flood. It was said Governor Leland Stanford arrived in a rowboat for his inauguration. This time, the temporary change was not only talked about, it was acted upon. The legislature moved on 24 January 1862 to San Francisco. They conducted their business in the Merchants Exchange Building at Battery and Washington Streets. When the next session convened, it was in Sacramento once again Permanent Quarters in Sacramento While state business was conducted in San Francisco, work continued on the new capitol building. It was designed by M. F. Butler. The groundbreaking was on 24 September 1860 with the cornerstone laid on 15 May 1861. This magnificent capitol building was constructed over a period of 14 years. Until 1868, when the roof was completed, work had to be halted during the winter each year. Special taxes had to be levied during this time to keep the project going. With all the various delays and problems, other cities once again renewed their bids to become the state capital, but none were successful. Finally, on 26 November 1869, the Governor and Secretary of State and staff took up residence in the new building. On 6 December of the same year, the Legislature convened in its chambers. Though occupied, work continued until the building was finally completed in 1874.

In 1879, a section was added to the State Constitution declaring Sacramento to be the seat of Government for California. It appeared that the state capital was finally permanent. All of the former state capitols were destroyed many years ago except the two story building in Benicia has been standing after 100 years. It had been used in many different capacities. During the 1950's restoration efforts began and finally, in 1958 the building was completely restored, in authentic detail and re-dedicated as a State Historic Park. In honor of the dedication, the state legislature designated the state capital to be moved to Benicia for one day only. A three-day celebration was held with the one-day commemorative legislative session being held on 15 March 1958. When it came time to celebrate 150 years of California statehood, the legislature once again removed the state capital to Benicia on 16 February 2000 to remember its heritage.