1859-60 The handtub is delivered to Glen Falls, N.Y., then sold to Richmond, VA, and later to Augusta, GA. Survived the Civil War as a "Confederate Engine."

1897 October - The handtub is sold to Randolph, Massachusetts Volunteer Fireman's Association for $700 & name changed to "ALABAMA COON", with $3000 worth of restoration.

1901 sold to Stoughton, Massachusetts for $410. Interior pump repaired with a Button & Co. pump.

late 1940's Alabama Coon was sold to Ipswich, Massachusetts, and name changed back to CITIZEN #1.

1953 Mustered as Alabama Coon through the muster season.

1969 John W. Lowe of Sonora brought her West for the first time and operated the pumper under the banner of the Standard Fire Brigade.

2007 Citizen was moved to the State Street Firehouse. 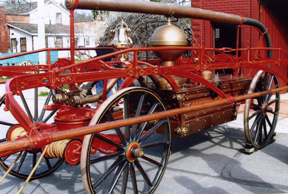 2011 May - Citizen was moved to her new home, the Fire Museum of Syracuse in Syracuse, New York.

2019 May - Found the Citizen was to be auctioned off along with other fire equipment. (Research by Richard Yokley) 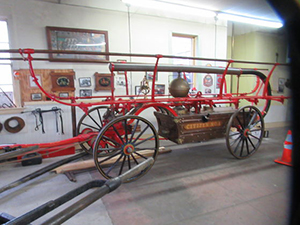 2019 July - Citizen sold at Auction to a past President of The Society for the Preservation and Appreciation of Antique Motor Fire Apparatus in America at almost $52,000 which includes a wagon, hand cart and what it had in it. Citizen 1 now resides in Camarillo, Ca in a private fire/ railroad collection and museum along with several other unique hand and motorized pieces.. - update from Bill Dundas 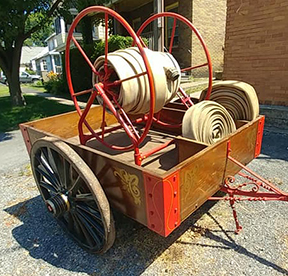 Most of the information for the above historical sketch came form the publication entitled "Cowing & Co. A story of their Fire Engines" published by the Seneca Falls Historical Society. (Unless otherwise stated)