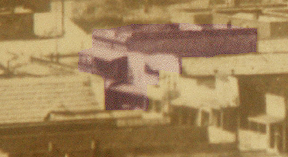 Originally the lot (where the City Hotel Lobby is located) is owned by Isaiah F. and Levi E. Colburn.

1852 The lot sells to Mitchell Coleman and John Mooney. It may have been a blacksmith shop.

1854 July 5 - George Morgan buys the frame building 5 days before the fire, that structure burns and he replaces it with 2 wood frame buildings. "English Ale and Porter House".

1854 Coleman deeds the property to Gordon and Austin Smith they have a blacksmith shop.

1856 August - the Columbia Gazette and Southern Mines Advertiser is published on the second floor of the building.

1857 August 25 - the brick building is damaged in the fire and the wood building destroyed. It is replaced with a brick building. P.G. Ferguson rents the lower floor of the north building for his retail and wholesale liquor store. The Morgan family is living in part of the building. The hotel is known as the "What Cheer House". It is not known exactly when Morgam first used the hotel as such. Several businesses moved in and out of the building in it's early years, but they probably did not occupy all of it. It is probable that Morgan took in "roomers" at an early date. (from Barbara Eastman via CDPR brochure 1974)

1858 January - Lenz takes over the business.

1858 February - Lenz's barkeeper, Adolph Bennitz, takes over the business. The Smiths sell the building to Antony Miller whose wife then runs the saloon.

1860 January - Ida Watts buys the building, she had been operating the saloon since Miller's death.

1860 Cheap John Louis's Auction Room is in the building. On the upper floor is a 42' by 44' hall used for theatricals and concerts.

1860 November - Watts sells to Seymore Hughes who moves his business: tinware, lamps, stoves and hardware into the building.

1865 April - G. Morgan buys the Smiths 1 story brick building on the south side of hotel.This building, with 18 feet of frontage on Main Street and a depth of 44 feet, was built at the same time as Morgan's original building and the two buildings had a single front with no dividing line. A second story was added to this section later (in the year), thus giving him two stories with identical measurements, 60 feet fronting on Main Street and a depth of 44 feet. (from Barbara Eastman via CDPR brochure 1974)

1866 Buildings continue to be damaged by fire and improved.

1871 Morgan advertised as "Morgan's Hotel." The hall is known as the Columbia Theater and Music Hall. (from Barbara Eastman via CDPR brochure 1974)

1874 The first time that it is called "Morgan's City Hotel." (from Barbara Eastman via CDPR brochure 1974)

c1887-88 G. Morgan adds a second floor to the south building and enlarges the hall.

1888 G. Morgan opens the "Open Air Pavilion" on the north side of the building. 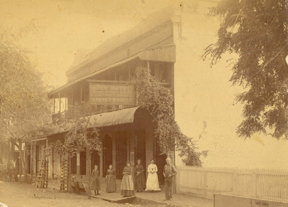 1890 By this time, the hotel had 20 sleeping rooms upstairs, a large office, bar, ladies' sitting room and a big dining room downstairs.

1891 July 19 - Hanged Himself - "SONORA, George Morgan, aged 73 years, an old resident of this city and engaged in the hotel business in Columbia, committed suicide this afteroon by hanging." - Sacramento Union 1891.

1892 After George Morgan's death, his widow leases the business to John W. Nash.

1897 By this time, George and Margaret's youngest son and daughter, Ralph and Maggie, own the property. Ralph is operating the hotel.

1902 William Koch builds a wooden addition at the rear, the lower floor was the kitchen, upper floor has toilets and baths. 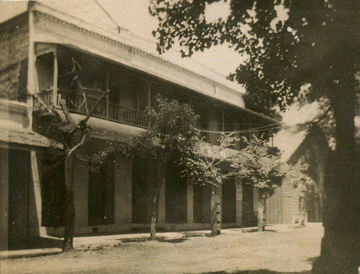 1911 April - fire destroys the wooden addition and the pavilion as well as the upper floor when the roof fell in. With little insurance, Ralph Morgan sells the property to Dante and Mary Cinelli. The Cinellis repair the brick building and rebuild the kitchen. They have 6 bedrooms on the second floor ready for renting by 1912. The bar is still open.

1911 September 4 - "The old Morgan Hotel at Columbia has been purchased by Frank Cameron, the butcher, for $1500. This historic hotel shall be named the 'City Hotel'." - (from the Sonora Union Democrat)

1912 January - A new "City Hotel" sign had been hung out in front, and the Cinellis were accepting guest. The Cinelli family operated the hotel, the last of Columbia's early hotels, until 1930. (from Barbara Eastman via CDPR brochure 1974) 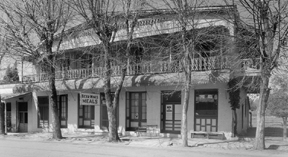 1940 April 9 - Mrs. Mary Nadotti is listed as the proprietor of City Hotel in the census. She is 53 which makes her born in Italy in 1887. Her husband Angelo is the same age and listed as a peddler of vegitables. He has an eigth grade education and she has two years in grade school. Their daughter Nellie is 19 years old, born in California and a clerk at a State Employment office. 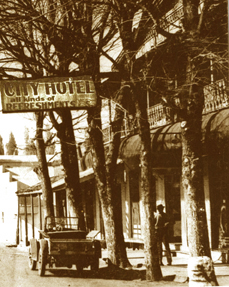 1947 State purchases from John Hirt et al. At some point there were 15 bedrooms upstairs.

1974 April - Building not operated while being restored.

1974 28 February - One year contract is given to the City Hotel Corp. as a use facility for vocational training and resort management. (Park & Concessionaire report 1969-70)

2006 Forever Resorts takes over the concession, via a month to month basis awaiting RFP. 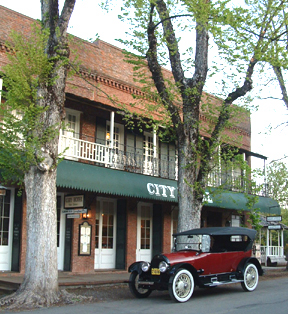 2010 May - Briggs Hospitality become the proprietors.

2014 February - Briggs Hospitality LLC who had the contract for this business gave their notice to vacate.

2014 May - State Park takes on the operatation of the City Hotel along with Fallon House.