COINS of the GOLD RUSH ERA.
Not all inclusive. 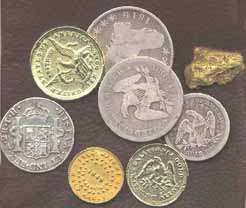 In California Gold and Silver were the only valued monetary exchange. The lowly base metals of copper and nickel were used in the east and shunned in the west. (Fact is, Copper coins were never seen.) 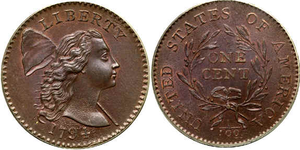 A miner's pocket wouldn't have held a copper penny.

By 1850 the coins of the world were classified into rates depending on their size. They were accepted in California, between 1850 to 1860, based on approximate values. The smallest coins of silver were considered "bits" (12.5 cents). "A bit was the least denomination of money, and very little of any thing could it buy." (The Annals of San Francisco 1855)

At the time of the gold discovery there was virtually no coin of any kind in California.... The immediate need for a medium of exchange was met very inadequately by the use of gold dust and nuggets....By 1851, the Philadelphia mint reported coining by fifteen private California mints, which produced one to four denominations of coin each....Foreign coins of all kinds circulated to some extend as late as 1856 - 1857..... On October 23, 1855, the Alta California editorialized: "There probably never had been a single State in the Union so imposed upon with a mixed and debased currency as California...." In April 1854, a U.S. Branch mint opened in San Francisco.... The California Historical Society, 1969, published "William Tecumseh Sherman: Gold Rush Banker", by Dwight L. Clarke.

Private companies created gold coins that matched the look of the government issued coins. These would be outlawed later in 1864 by an Act of Congress. 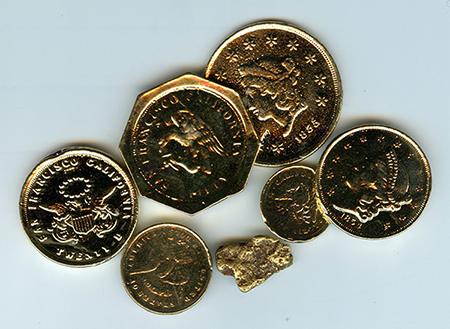 Norris, Gregg & Norris struck what are generally considered to be the first issues of private California gold coins; they were Half Eagles ($5).

Moffat & Company, one of the most important of the California private gold mints, also got its start in 1849, as did several other California firms.

From 1850 to 1860 the dime became the smallest coin used. Sometimes considered a bit. If you gave a quarter for a "bit" item, you would get a dime back in change. In California anything smaller was associated with poverty. As Samuel L. Clemens noted, "During all this time (while in San Francisco in the mid 1860s) I had but one piece of money (a silver ten cent piece) and I held to it on any account, lest the consciousness coming strong upon me that I was entirely penniless, might suggest suicide."

1870s Californians detested the nickel as the "half-brother to arsenic." (Daily Alta California) Even in the 70s, Green-backs were known as "this monster serpent, paper money."
It was after the gold certificate was issued in the 1870s that started to change the attitude of "promissory checks" of the government.