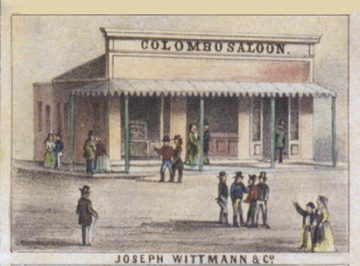 1852 On State & Main Streets (southeast corner) this lot had a wood structure known as the Italian Saloon. Owner, Luigi Marietti.


"In the Colombo Saloon deeds...the saloon was on the north 35' half as they called it, while Stone's Stove Shop was on the south 19' half. Apparently it had originally been considered a 50' lot and then divided, both keeping the lot number originally given as Lot 50, then later being changed to Lots 1 & 2."


1853 The Colombo Saloon, with Wm. Daegener as part owner. By the end of the year, the saloon operators are Joseph and Catherine Wittman.

1854 D.S. Jocker & Co. buy the building in February. By June, Wittman is again running the business. After the July fire, the building is rebuilt of wood and is both a saloon and a restaurant.

1856 An advertisement appears in the Weekly Columbian newspaper, for the "Opposition Line of Stages."

1857 J. D. Patterson's stage line has an office in the building.

1857 Burns in the August fire, rebuilt of wood.

c1860 Franklin and Wolfe own the building, they sell to Wittman and J. Vanderbuilt.

c1861 Franklin and Wolfe sell to Wittman and J. Vanderbuilt.

1862 Wittman and Jockers own the building.

1870 C. Koch is the owner, both the saloon and restaurant are run by D. Rolleri.

1900 At some point after this there may have been a traveling photographer on the site.

1945 The empty lot was the center of activities during ceremonies establishing the town as a park.

1973 The lot was being used as the Stage Coach Depot. (per "Columbia Memories" by W. Lee Roddy)

This page is created for the benefit of the public by
Floyd D. P. Øydegaard