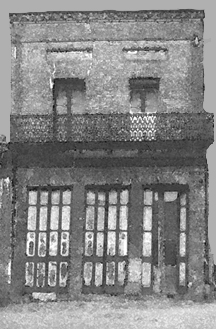 1851 September - the lot is owned by Juan Baudeno and Juan Orosco.

1853 September - Dr. McChesney sells the west part of the lot to Enoch Covert who sells it to Drs. Oxley and Campbell who open an office in the building.

1854 In the spring - McChesney leases the drugstore to Oxley and Campbell.

© Bancroft Library.
An 1854 image of the Columbia Drugstore.

1854 July - the building burns and is replaced with a canvas shelter.

1855 March - McChesney sells the drugstore to Oxley and Campbell.

1856 July - a two story brick structure is built by John C. Duchow, the lower floor houses the Columbia Drugstore, the upper floor has a print shop and is the office of the Weekly Columbian, published by J. W. Oliver.

1856 November - McChesney sells to Parsons, and the Weekly Columbian moves. Dr. Parsons was a dentist.

1857 August 25th - Fire ravages town. "Our office situated on the second floor of Parson's fire-proof building, was uninjured with the exception of a few newspapers, a chair leg, a box of matches and the floor charred." - (from the Sacamento Daily Union August 29, 1857, quoted from the Columbia Courier)

1860 John C. Duchow moves the paper to his own building.

1863 February - the building sells to John C. Duchow, the 3rd regiment stores its equipment in the building.

1864 The 3rd regiment again leases the building which is now called the Union Hall.

1866 July - John C. Duchow returns the printing press and equipment to the second floor and rents it to William O. Dinsmore who publishes The Columbia Citizen.

1866 October - the lower floor is rented to Charles Strake and J. Wedel's outlet for the Springfield Brewery.

1880 February - Henkleman's Saloon is in the building.

1898 Pitt and Carder's Blue Wing Saloon is on the lower floor, the name is later changed to the Wild Horse saloon.

1898 December - Ben Pitts re-names the saloon the Court Exchange, Judge Lindsay prepares to open his courtroom in the building.

1903 Gus Groelper plans to open a lodging house in the building.

1940s and 50s there are living quarters on the second floor of the building. Stairs lead directly from the street.

1940s and 50s Robert M. Hooe has the California Studio Photography in the building.

1949 The Upstairs is a printing press display. 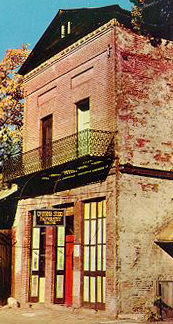 1954 The drugstore exhibit is installed on the lower floor through the efforts of Louis Stein and the California Pharmaceutical Association.

1991 Front of exhibit is remodeled so that visitors can read the labels on the jars. 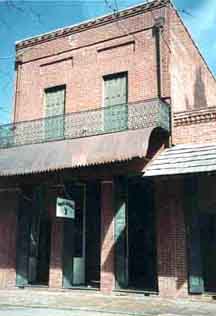 This building and the interpretive display can be maintained by your support
with a generous donation to FRIENDS of Columbia SHP.