1854 Burns, rebuilt of wood and used as a temperance house and bakery.

1856 Owen Fallon, who was born in Ireland, grew up in New York, comes to Columbia after being in California some years.

1857 June - Owen Fallon purchases the Maine House, by this time it has a bath house at the back.

1857 August 24 - the structure burns, and by September is again rebuilt of wood. 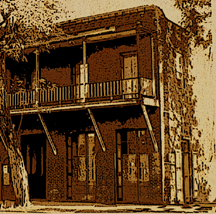 1860 August - Cardinell with the help of Fallon, builds a two story building of brick next door to the Fallon House.

1863 After purchasing Cardinell's brick building to the east of his structure, Fallon pierces the wall to form a single building, the Fallon Hotel. The second floor is made into a ballroom.

1864 Fallon buys land on the west side of his hotel for a garden and stable.

© Columbia State Historic Park.
Columbia Mine behind the Fallon - c1866

1871 Gorham withdraws from the partnership and later P. H. Medley runs the hotel. He converts the upstairs ballroom into 4 bedrooms and builds a new ballroom.

1873 Henry Wilson sells to Owen Fallon and Fallon is again running the hotel, advertises as a "headquarters for mining men."

1880 Owen Fallon deeds the hotel and other buildings to his wife, Ellen.

1886 The ballroom on the first floor of Cardinell's structure is converted to a bar.

1889 Gallagher sells to Tom Conlin. He moves the Wells Fargo office to the hotel and also has a variety and stationery store there. 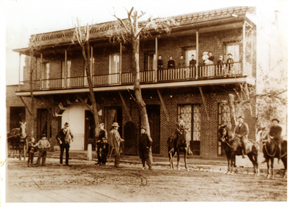 
1892 June 25 - The Fallon Theatre (the second floor of the hotel was not partitioned) had a performance by The Gold Run Amateur Dramatic Association. The Comedy-Drama in two acts, entitled: "Hick'ry Farm" (A romantic picture of New England life). The cast & crew included James G. Fallon as Scenic Artist (of the late East lake Amateurs) and in the role of Uriah Skinner. "The whole to conclude with the Laughable Farce entitled "Fallon, hit that big drum once more, for my darling's dying." sample of poster. 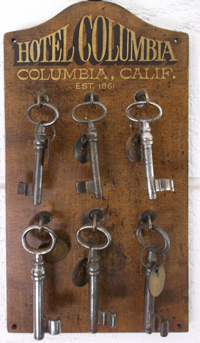 1928 Smith and Peters leased hotel to the Nelsons then the Conrad's (This may be spelled with a K). 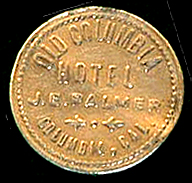 1940 April 9 - Census states that Mable Palmer is the proprietor of the Columbia Hotel. She is 44 and born in Nevada. Listed as a Widow with four children and one nephew. 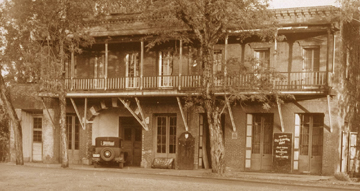 1950s Residence for COP drama students during the summer until the Eagle Cottage is built. Students drape their beds in canvas to protect them from bat guano, falling plaster and bricks. Windows on the west wall had wooden shutters made to resemble iron shutters. They are supposed to keep out bats, bugs and curious visitors.

Mid 1950s Wood buildings at the south end of the structure, called the kitchen and barber shop, removed.


2014 February - Briggs Hospitality LLC who had the contract for this business gave their notice to vacate.

2014 April - The state separates the Ice Cream Parlour from the Fallon Complex as a stand alone concession.

2014 May - State Park to operate City Hotel with Fallon House.

This page is created for the benefit of the public by
Floyd D.P. Floyd D. P. Øydegaard.