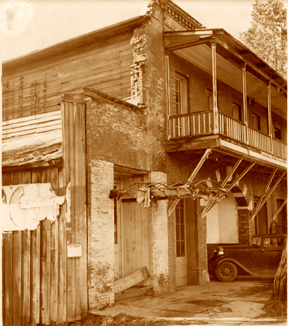 Originally 2 lots, the eastern section has the Ticonic Hotel.

The western section was the site of John Leary's house.

1856 Charles Cardinell buys Leary's lot on which he starts to build a 2 story brick structure, he also buys the Ticonic lot (where present Columbia Gazette display stands) and mortgages it to James A. Cowan.

1857 Cardinell sells a half interest in the unfinished brick building to Cowan.

1858 Cardinell and wife sells the other half interest in the unfinished building and all of the completed structure to O.C. Gunn.

1861 The building is damaged in the fire and not repaired. The shell was sold to Pascoe. 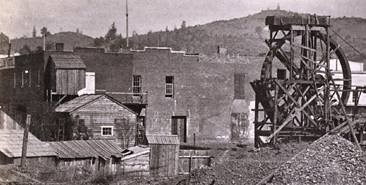 © Columbia State Historic Park.
Back of the Fallon - west, Cardinell building and "empty shell" (behind wheel) - 1866.

1867 The site is mined, only part of the wall fronting Washington Street remains.

1886 Built by James Fallon. He may have incorporated the 1871 hall. The entrance is through the shell of the Gunn Saloon. It is known as a hall and not a theater.

1890-91 Edward G. Kress jacks up the floor and inserts spring cushions under the floor, covers the walkway between the brick building and theater entrance, enlarges the stage and has green rooms underneath. He also finishes the interior decorations.

1921-28 Smiths and Peters cut down the stage to enlarge the dance floor. On Saturday nights they hold dances with music by the Tuolumne County Orchestra and occasionally show movies. Seats are wooden benches and the hall is lit by kerosene lanterns.

1949 Plays by College of the Pacific drama students, at the beginning the sets were built in Stockton and moved to Columbia. Seats were folding chairs until permanent seats were donated by a theater in Stockton and installed in the early 1950s.