The story of two lots.

The California Store is on the north side of the south section of the lot, which started out as 2 lots:

The north part of the lot, which is now empty.

1855 In October - the saloon is the scene of the shooting of John H. Smith by John S. Barclay (husband of Martha Carlos), and his "trial". After her husband was hung, Mrs. Barclay leases the building to Samuel Mitchell.

1857 After the August fire, Mitchell rebuilds the structure of wood and calls the new saloon "Long Tom".

1858 March - Sam Mitchell sells to Jerry Mitchell, who also buys the next lot south which has a wooden building and joins the 2 structures. He now has a two story building and advertises 8 bedrooms on the top floor as well as the saloon.

1865 June - the building burns, and the empty lot is purchased by Labetoure and D. McLean of Sonora. They in turn sell it to J. J. Griffoz (Greffoz) of San Francisco.

1871 The lot is assessed to Chee Chung and Co. who are mining it.

1879 In December - Ludwig Schwartz buys the lot joins it to the south lot.


The south part of the lot.

1857 Four days after the fire, Alexander sells to George Peck from Shaw's Flat. Peck leased the lot to Weyant, Cara and Cyrus Matice. They put up a 2 story frame building and opened a saloon.

1858 August 4 - George Peck sold to Jerry Mitchell. The building has 8 bedrooms on the upper floor and a gallery across the front. There is a private apartment on the lower floor entered from the street and enough room for a dozen to twenty card tables on the lower floor, which now opens into the single story frame building the "Long Tom Saloon" One of the largest saloons in the county also boasting a superior billiard table.

1875 June 25 - town trustees grants 17 feet of the lot to Fred Zwickert, who has also purchased the lot on the north. Louis Brunet owns the rest of the lot.


During this time the current building was moved onto the lot. 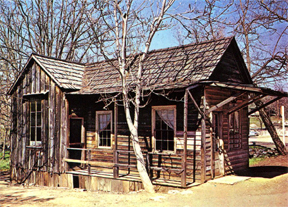 1879 Ludwig Schwartz leases the space for a shoe store.

1879 December - Judge Kluber sells the lot to Schwartz who joins the 2 lots together.

1911 Schwartz dies, and the property goes to George H. Cornish.

1930s the cabin is lived in by Carlo Franco, who runs the St. Charles saloon.

1947 State purchases from Carlo Franco for $1000, he continues to live in the building. 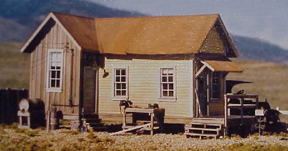 1962? Building converted to display of a "miner's cabin".

2004 The cabin is modified into the "California Store" and becomes a static display used by docents to interpret an old dry goods merchant of the early 1850s. 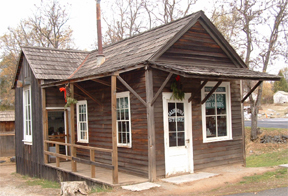