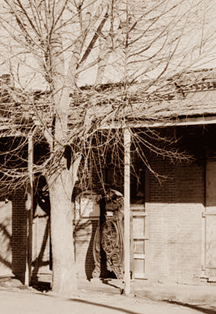 © Columbia State Historic Park.
(Touch image to see the whole block. Image c1934.)
AND What is that metal contraption?

The following is a study of The Building known as the Franklin-Wolfe: oldest brick structure of Columbia.


1851 July 13 - Fernando Yrizar claimed possession of land running 75 feet on the street and 100 feet deep. He builds a wood structure.

1854 Benj. M. Brainard agrees to let Franklin and Wolfe build a common brick wall on 4 inches of his property to construct a 1 story brick building.

1854 June 5 - Agreement between Benj. M. Brainard and Franklin & Wolfe; Brainard hereby agrees to permit Franklin & Wolfe to build the wall of the building they are about to erect on Main Street, 4" upon his ground. He also agrees to give them a deed to the ground back of their lot, running 19' back and 11' wide, and also will pay them $125 when the wall is completed with the understanding that he is to be half owner of said wall, and to have the privilage of putting his timbers thereon, and to have equal rights thereto with Franklin & Wolfe, he being about to erect a brick building on the south next to theirs. - (Eastman - Volumne 7 - 727 Columbia Deeds & Claims)

1854 August 12 - Brick building was finished. They move their Variety Store into the building. (The Variety Store will run until Dec. 1859.)

NOTE: Franklin & Wolfe leave their building or add another building to their list? 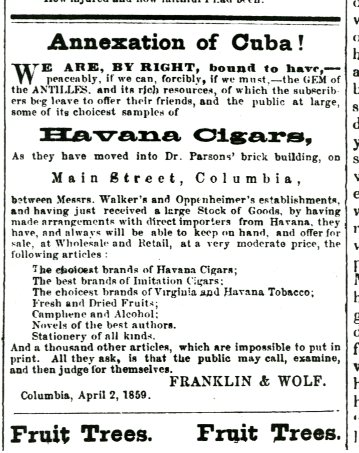 1860 December 1 - They sell their first brick building to Jos. Rodgers, who leases it to Henry Hemmer for his boot and shoe store. Later leased by Mrs. McGinnis for her boarding house. Within a few weeks Alexander Franklin moves to San Francisco.

1861 Anspach Wolfe is closed down by Sheriff.

1870 Levy sells to his father, Joel, who has a fancy and staple dry goods store.

1871 August - Joey Levy has a fancy and staple dry goods store. He also has Block 10, Lot 171 (This property extends to Fulton at the eastern side.) - Deputy County Surveyor map by John P. Dart 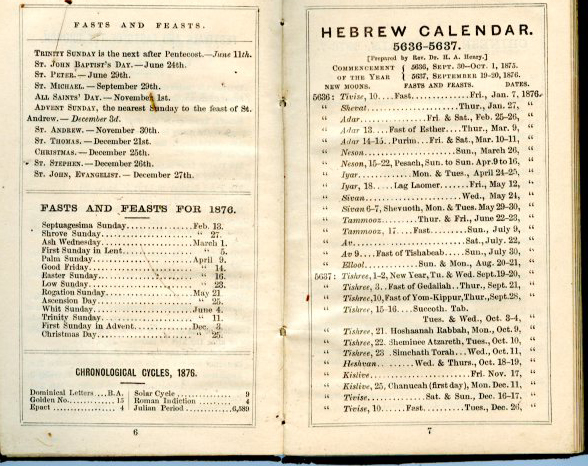 1878 Knapp sells to Louis Levy who is postmaster and has a general furnishings goods store.

1880 David Levy opens the Dividend Saloon in his brother's building with a billiard room, "most elegant saloon in county".

1880 May through Oct. - David Levy advertises the Dividend Saloon with these words: "This is the most elegantly fitted up saloon in Tuolumne county. Here you can always obtain the best brands of Liquors and Cigars. Fine Wines and Liquors a Specialty. Do not fail to call on us when in town, and we will treat you like a Prince of Good Fellows. Robert Monroe, Manager." 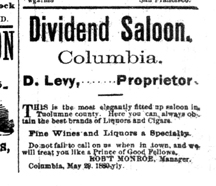 1898 July 4(?) - Image of the Columbia Brass Band is made near the front of the Franklin & Wolfe building. In this image (section from full image) is Bert Yuill and a young girl, in the background, standing near "her?" bycicle, which is near the front door of the building. Take notice of the dirt street and the "holiday" bunting. 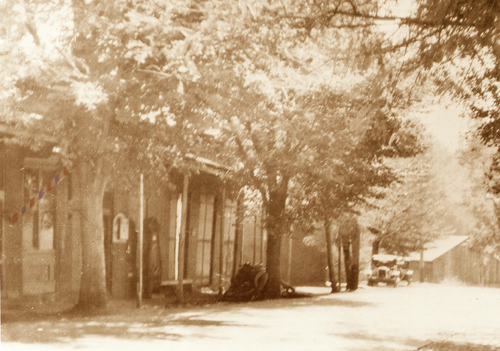 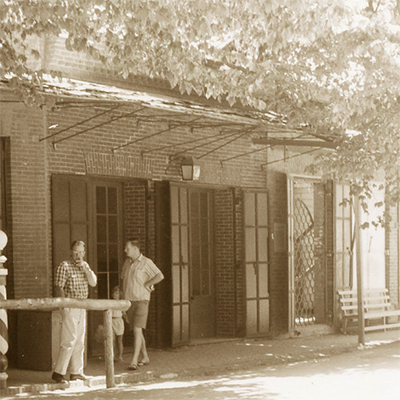 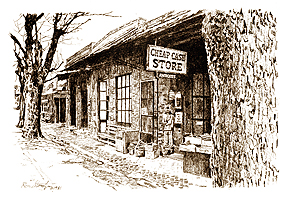 2002-2004 State Park uses it for the info center while the Knapp Block is repaired.

2006 March 1st - the Columbia Booksellers & Stationers has moved from the Columbia Gazette to this new location. 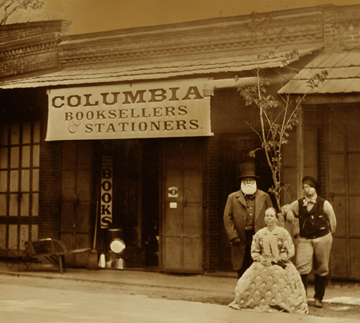 2019 May - The building is reopened by M. & R. Sharps, after taking over the 8 year contract remaining.

NOTE: Anyone with information changes or copies of materials that relate to the Cheap Cash Store; Franklin & Wolfe Building or the town of Columbia that might shed more light on my on going research is welcome to write to me via email or the Postal Service and send copies of said info to 11259 Jackson St.