(AKA Native Sons of the Gold West Parlor, Columbia Museum for the NSGW.) 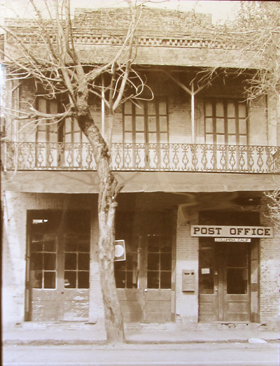 1854 July - the lot and store are acquired by Michael Hildenbrand. The structure was burned in the July fire and rebuilt of wood. (Note: Michael Hildenbrand was born 17 Dec 1819 in France & died 1871 in San Francisco, California. See Chart created by Charlene Duval)

1855 Hildenbrand acquires the property behind the building which ran north to State Street and builds a residence on it. 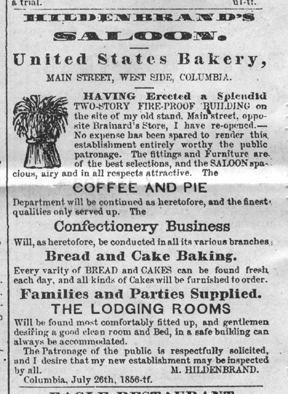 
1856 A two story brick building is on the lot. A bakery and confectionery store is on the first floor with lodgings on the second. An ice cream parlor was added to the bakery with several marble topped tables.

1858 One of the upper rooms becomes the meeting room for the city trustees.

1860 Hildenbrand rents the building to Jacobi and Morris who have a clothing and dry goods store on the premises.

1861 Hildenbrand sells to Joseph B. Houghton who rents to Kohn, Jacobi & Co. 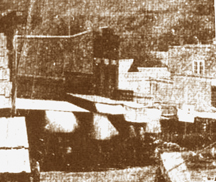 
1864 Ed Elias advertises a toy and fancy goods store in the building.

1865 The building sells to George Kordmeyer and Charles Snyder, who open a saloon.

1876 William Siebert and Frank Vassallo own the building.

1885 September - Siebert converts the building to a residence for his family.

1913 October 23 - Columbia Parlor #258 was then instituted, making it the only time, where a Parlor name was reissued.

1920 The Native Sons of the Golden West purchase the building, with the efforts of Frank Dondero, which included the "justice court" and the lot north of the building, from Mrs. Siebert. 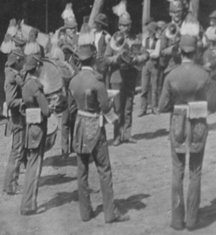 1923 September 9 - Native Sons of the Golden West sponsor an Admission Day Celebration at the parlor. The bottom floor was a furniture and bedding store.

1966 July 2 - The Hildenbrand building is restored. 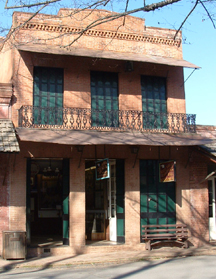 Contact information for
the Native Sons of the Golden West