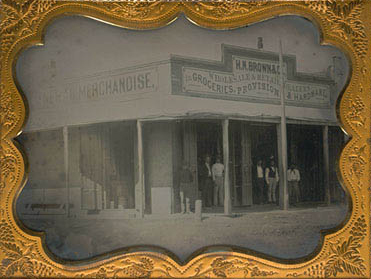 1854 June - Brown starts construction on a building which is destroyed in the July fire. He rebuilds of brick. (See Ambrotype above)

© private collection of web master.
The sign on the store front. 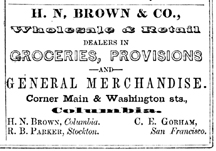 © private collection of web master.
Brown takes out an ad in the Businessmen's Directory - 1856.


1857 August 25 - the fire causes the black powder in the building to explode and the store is destroyed. Five men are killed including Brown. A sixth died later. (Mr. Brown's grave is in the Columbia cemetery, the first one on the right side of the road, just inside the gate.

1857/58 R. B. Parker in partnership with C. E. Gorham rebuilds on the site. General merchandise store.

1866 Parker and Bacon operate the business.

1867 Bacon buys out parker. Bacon becomes postmaster, in addition to post office they have groceries, dishes, miners' and farmers' implements and hardware.

1870 By this time the building is destroyed by mining and Washington Street had been realigned. 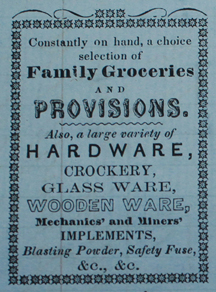