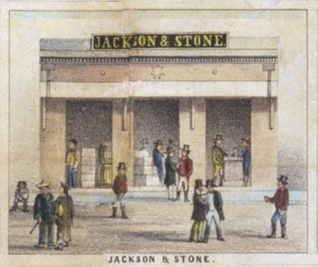 1850 September - James A. Jackson and Stone build the first log cabin store on this site, advertise as "Columbia's Pioneer Store."

1854 June - a brick building is erected just before the fire.

1858 March - Jackson sells to Raymond and Holton who continue "Provisions and General Store" along with their soda business.

The side of the Jackson & Stone building (bottom right).
Looking north on Main Street - c1863.

1864 Holton sells to Isaac Shotwell. After Shotwell's death, his son sells to Phelps, Shepherd and Cowie of the Sonora Foundry.

1871 Sells to Charles Koch. About this time or soon after, the area is mined and the building torn down.