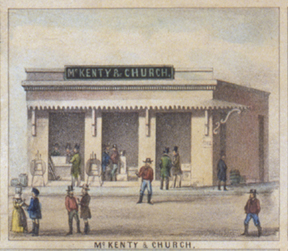 Forgotten Buildings is what Mrs. G.W. Eastman called Block 10 as she described (in 1954) what was here; Southwest corner of State and Broadway.


1854 McKenty & Church have a business on the southwest corner of State and Broadway.

1857 August 25th - The fire that ravages most of Columbia spares the McKenty's brick building.


NOTE: No records have been found (research needed) to discover what happened to the brick building after this date.
See Tamale House for continued story of lot.