Built by William Torboss of New York. Ny 1856
MONUMENTAL.
from the research of Richard Yokley

The old volunteers tried to outdo themselves in constructing the most elegant and grand building to house their engines, and also have a place to entertain their friends. One of the finest of these was the "Hall" of the Monumental Engine Company as it was known in the days gone by. It was a magnificent building, originally two stones in height, the first having a granite front, the second being freestone, massive pilasters of Corinthian style supported cornices. In the facade was a large clock, which was illuminated by night. Over the pediment of the clock was a cupola the dome of which rested on eight Corinthian columns. The interior was more elaborate, with a winding marble stairway and polished mahogany banisters. The front windows were imported stained glass with the insignia and motto of the Monumental's "We stand to serve." The floors were laid with deep Oriental rugs and the rooms draped with rich burgundy velvet drapes. The furniture was made of beautiful hand carved wood with red plush seats.

Late in 1859 - Manhattan Engine Co. No. 2 offered the engine for sale, as the 5,300-pound weight of the engine proved unsuitable for San Francisco's hills.

1859 November - Another subscription was made by the ladies of Columbia and $2000 more raised for a second engine. Called Monumental and as the story goes it was too heavy to use in San Francisco, and they were glad to let it go.

1859 November 23 - Columbia Engine Co. No. 2 is organized for the second engine (Monumental) at Colombo Saloon.

1859 December - Columbia Engine Co. No. 2 prefer to remain independent and the Phoenix Hook & Ladder Co. and Tuolumne No. 1 join forces and become the City Fire Dept.

1859 December 31 - Tuolumne Engine Co. No. 1 has their first Annual New Year's Ball at Cardinell's Theatre. They continue these Balls for forty years.

1860 - James McClean was the first chief of Engine Company Two, went to San Francisco to purchase "Monumental." She weighed over 5,000 pounds. She was so heavy, in fact, that during the response to a fire in 1861, Udo Von Keller slipped while grabbing the rope to assist moving the engine and was crushed beneath the wheels. Her size proved unsuited to the hills of San Francisco and she was sold for $2,500, about a third of the original cost. The funds for her purchase were again raised by the ladies of the town. Engine Company Two elected to remain an independent organization, not joining the city fire department until 1868. (Major fires would ravage the town in 1860, 1861, 1865, 1866, 1885, and 1920, but due to the efforts of the two companies, the town would never again be a total loss.)

1860 January 7 - second engine named "Columbia No. 2", arrives in Bensonville and is housed in Hughes Barn. Later brought to town and set up at Alvin Evan's Stable at the southeast corner of Columbia and Jackson Streets. (1860, January 7th: The Torboss engine was sold to the Columbia Volunteer Fire Department for $2,500 - Source: Frank Soule, John H. Gihon, M.D., and James Nisbet. The Annals of San Francisco. 1855: San Francisco)

1860 February 22 - Tuolumne No. 1 and Columbia No. 2 demonstrated in Sonora to the delight of the Sonorans who did not yet have an engine.

1860 May 23 - Columbia No. 2 is removed to C. Humbert's building on the west side of Main Street, two doors above Jackson.

1970 The handpump was restored under the direction of Robert Fries, the fire chief of the Sierra Conservation Center in nearby Jamestown, California

1991 - Shown displayed on Columbia's Washington Street during a muster. (see image below)

2003 The Columbia Volunteer Fire Department gave it a cosmetic overhaul.

Although it has not competed in California Firemen's Muster Association musters, it can be pumped, but with only two of its cylinders in service at this time.

The "Monumental" is displayed in the Columbia Volunteer Fire Department's old station on Main Street in the California State Park.
Most of the information for the above historical sketch came form the reasearch of Richard Yokley and Ed Hass. 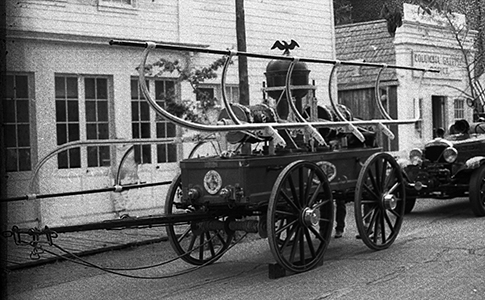