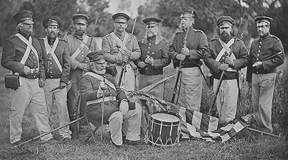 Beginnings
"In 1845 and '46 the people of the United States were very much excited about the trouble then brewing between our Government and England, on account of our northwest boundary line. We claimed the line should run to latitude 54:40'. The English differed with us. The excitement grew so high and widespread that 'Fifty-four forty or fight!' was the cry, especially with the young men of the United States." So began the opening words of the book devoted to the history of The New York Volunteers in California. The account goes into detail of the efforts made by Col. J.D. Stevenson to bring a group of men to California for the purpose of protecting it's shores from Mexican occupation and as the popular song went, "Success to California, likewise to Oregon; and the rooster that crows there must be Uncle Sam!"

Company D
Enlisted at La Fayette Hall, Broadway, opposite Nibblo's Garden, New York City, in the summer of 1846.
The ship "Susan Drew" arrived in San Francisco March 19th 1847. On the 1st of April the Company embarked on the U.S. Storeship "Lexington" and sailed for Monterey on the 3rd, reaching port on the 4th. While stationed at Monterey, portions of the Company were mounted and sent upon several expeditions in quest of Indian horse-thieves in the San Joaquin Valley and the Sierra Nevada Mountains. These men traveled many years and encamped at nights upon the same ground in which were afterwards found such rich gold deposits. On the 5th of March 1848, the Company sailed in the ship "Isabella" for La Paz, Lower California, arriving there on the 22nd of the same month. Within a week they marched into the interior and engaged the Mexican forces at Todas Santos, completely dispersing the enemy and driving them from the peninsula.
"This Company was without doubt the last command of American troops to leave the soil of Mexico after the close of the Mexican War."
The book has the names of 129 men for Company D. 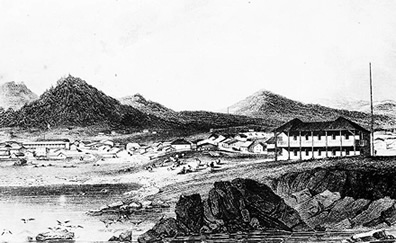 Monterey's Custom House as it appeared in 1846.


Company I
The Steuben Volunteers, under Captain Shannon were considered "intelligent and vigorous young men, of many trades, excellant habits, urbane manners and enterprising spirits." (Well, one out of six ain't too bad, huh?) See a self portrait of one such officer!
We left New York on the "Susan Drew" and reached Monterey by way of San Francisco by the 4th of April 1847, "where the four companies (I, D, G, E) went into camp on the green in front of the Catholic Church, which in honor of General Stephan W. Kearney (commanding the Military forces in California) was called Camp Kearney....Company I took post at the Barracks in the town," on the 5th of may and remained until the 28th of December, when we depart for San Diego.

Our Many Names
Officially the regiment began its service as the 7th Regiment of New York Volunteers. Because of its destination it was variously known in New York before its departure as the California Guard and the California Regiment. As it was equipped to act as a force of combined arms of infantry, cavalry, and artillery, it was also termed the New York Legion. Once in California it was also called the California Volunteers. It became the 1st New York Volunteers in early 1848 by a War Department redesignation. (Buttons, like the one pictured above that bear the "NYL" letters have been found at the earthen fort in Monterey and in and around the area once called Soldier's Cap near the Stanislaus River banks in Calaveras County.)

We were also more widely known as the Stevenson Regiment. This title is the most commonly used to describe us even today. Named after the Col. of the Regiment.

James A Hardie who was a major in the 1st New York, commanded troops sailing for California on the ship Loo Choo and mustered out Companies C, K, and H at San Francisco August 15-25 1848.

The members of the Stevenson Reg't also traveled to the gold fields and their history is here: Tuolumne Co.

Image by Floyd DP Øydegaard
The Silver Medallion
It recently came to my attention that a medallion had once been issued to Charles D. Lyon, Company A.
The owner of the medal states: The silver medallion was issued to the New York Volunteers by the City of New York shortly after the war. This particular medallion was given to Charles D. Lyon, Company A, and is so inscribed in beautifully flowing script (but hard to see on my scan) on the obverse. The legend reads, "Presented By The City Of New York/To The N.Y. Regiment Of Volunteers In Mexico", with Lyon's name and company. The reverse reads, "Cerro Gordo/Chapultepec/Cherubusco/ Vera Cruz.", with a goddess of war symbol. The medallion is nicked, with a dark patina, but is a rare icon, once belonging to one of the adventurous men of the New York Volunteers during this fascinating era of America's History. - from Charles Anegan.
More Details: The medal was issued to Burnett's 1st New York by the city, upon their return from Mexico. They were with Gen. Scott, hence the list of Mexican, not Californian, battlefields.
Note: New York was supposed to raise six regiments for the war. If memory serves, recruiting was such that they consolidated all that had signed up into one unit, Burnett's 1st NY, while recruiting continued for the other five. That is why Stevenson's unit was designated the 7th NY. Stevenson's, however, was taken into Federal service first so after the war the War Department re-designated the 7th into the 1st NY and the 1st into the 2nd. The 'Company of Military Historians Journal' did an article on the medal given to members of Burnetts regiment. - from Charles Nohai