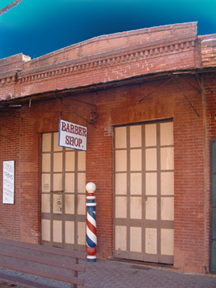 1851 Fernando Yrizar has a store and restaurant on this lot. There are wood buildings on 4 lots in a row.

1854 Ignatio Christian owns the lot, Carpenter and O'Hara (Uncle Billy) are operating the Jenny Lind restaurant. Christen sells the lot to Sam Leon who has a clothing store and adds a frame building in the rear.

1856 spring - Leon builds a 1 story brick structure with the "back building" where his family lived. By the end of the year, the business sells to Morris Lewisson. Later, Jacobi and Morris, auctioneers occupy the store.

1860 Leon returns from San Francisco and opens a grocery store with his partner, G. J. Ward. Ward leaves in September.

1868 After renovating and adding bath tubs, Koch opens his barber shop. One window is rented to Martin's jeweler's shop.

1898 Frank Dondero takes over the shop while Koch lives in the back rooms.

1900 Koch gives half interest in his property to his nephews, Charles Mayer and Richard Luckow.

1929 Luckow gives his interest to his children: Richard and Charles Luckow and Laverne Luckow Nicolas. 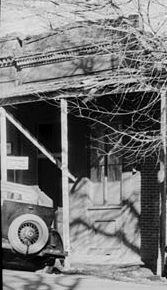 
"The barber who was there, when I visited with my class, used to get people out in front of the store and show the crowd the finger he found down on the waterfront of San Francisco after the earthquake of 1906 and the finger belonged to Three Finger Jack, the famous bandit.
"He had the finger in a little white box and, of course, it was his own finger, which the crowd would plainly see. When they got closer, he moved the finger and shouted, 'It's alive!' Everyone jumped 10 ft straight up." 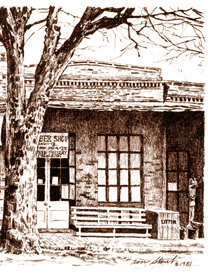 2010 Kamice's Photographic Establishment opens in the building as a temporary location.

From the Thames Salon read the
Barber Pole History