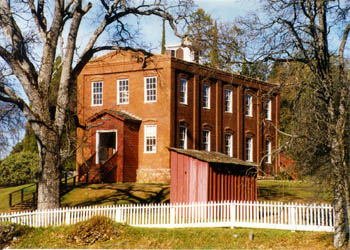 1860 February - the school lot is purchased and the building plans are selected; it is to be built by Mr. Donegan and is to be open by July 1. The lot is supposed to be planted with trees and ornamental shrubs and vines. The cost is estimated to be $4800.

1860 October 8 - the school building was completed: it has a tin roof and cupola.

1860 November - dedication ceremonies were held. The ladies of the town held a grand calico party to raise money for a school bell.

1861 March 18 - students are in the building but there are no desks. The school term runs through the end of July. (four months)

1872 School renovated and a partition built to divide the lower room in two.

1881 School renovated again, a fire escape at the north end of the building is rebuilt.

1937 School closed as it did not meet earthquake safety standards. School held in tents on the grounds until the new buildings were completed.

1947 State purchased from the Columbia Historic Park Association for $1.00

1960 School building restored for $60,000, $52,000 of which was raised by teachers and students as well as funds raised by California Teacher's Assn.