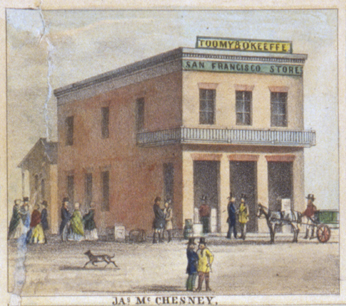 Bernard and Cheminant first own the lot.

1852 Captain Edward Raspal owns the lot, has a two story frame building on the lot "Captain Raspal's Billiard Saloon" with sleeping quarters on the second floor.

1854 After the building burns in July, the lot is sold to Dr. James McChesney. He starts a two story brick building, and has a store on the lower floor with his office in back and a meeting hall on the second floor. (See image above.)

1855 The store is Toomey and O'Keefe's San Francisco Store--Family Grocery, etc. The sign that was painted at the top of the building can still be faintly read (2006). 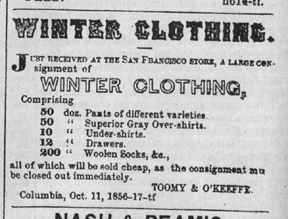 Odd Fellow Bldg. on the corner of Jackson and Broadway before the fire.

1857 May - Dr. McChesney has his office in the store and his residence in the back. He says he will open the Empire Drug Store.

1857 August - McChesney sells the building to Albert Carver. As Carver was a member of the IOOF whose meeting house had burned in August, the IOOF became regular tenants of the second floor. Toomey sells the business to Charles Russell Bowen who marries one of Benjamin Harrison's daughters. Harrison's business is next building east.

1868 May - Carver sells the building to IOOF. Shaw continues the grocery store until 1871.

1872 For a few months, Tibbits has his office on the lower floor.

1878 summer - the lower floor was used as a drying room for the fruit drying and preserving company across State Street.

1880 spring - the lower floor is being used as a practice room for the brass band. 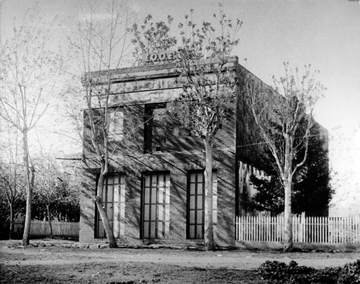 Odd Fellow Bldg. on the corner of State Street and Broadway - 1940s

1949 The building was purchased by the state from local IOOF for $1.00 and is rented back to them. The upper floor is still used as their meeting room. Lower windows were for a display.

1998 The balcony and backstairs repaired and/or replaced.

2007 The state does some major repairs on the building.

2012 August - Kim Kyhl sells out to Seven Sister's Soap & Candle Company and they move back to Konrad rebuilt.

2013 Building (lower level) is used as a store display for classes. 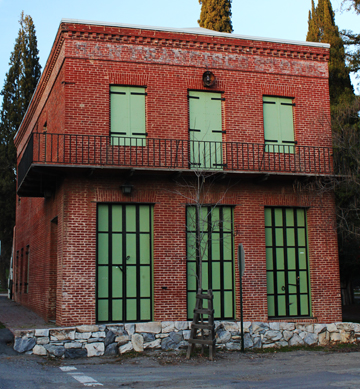