© Columbia State Historic Park.
Soderer building is to the left - 1910.

1851 The lot is the south part of the Patterson House Saloon owners Henry Dawson and John D. Patterson. A wood frame building.

1852 Part of the building is rented to Charles J. Brown who runs a bank and express office as well as a book and stationery store.

1853 Heslep, Yaney and Co. acquire the lot and sell it to James A. Jackson. Brown rents the book and stationery business to Robert H. Towle.

1854 Towle buys the business. S.G. Bailey, watchmaker and jeweler, is also in the store. After the July fire, the building is rebuilt of wood.

1857 August - After the fire it is rebuilt of brick. James A. Jackson operates the "American Emporium of Fashion".

1858 November - the partnership dissolves and Bliss takes over.

1860 February - N. Soderer takes the place of the "& Co." and the business name changes to Oak Hall Clothing Store.

1860 December - Fisher leaves and Soderer tries to sell the business.

1866 Philo Medley takes over the business.

1871 Gideon Wing moves his tin shop into the building.

1873 Parsons sells the building to Siebert and Vassallo.

1889 Vassallo sells out to Siebert. 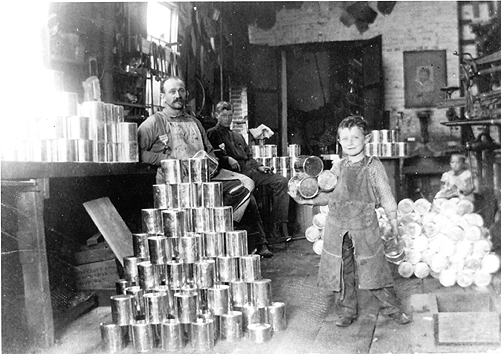 1902 Ira Ogden reopens the tin shop in the building.

1903 April - James Fallon, Justice of the Peace, opens a courtroom in the building.

1930 Hubert Brady offers his tin shop to Otheto Weston for a studio. She opens the Old Trading Post.

1940 Mrs. Beeheimer (not sure of spelling) had sandwich shop in building.

1960 April - Mellor's Candy Shop closes in this location and moves one building north.

c1959 R. Miller had a shoe repair in the building. 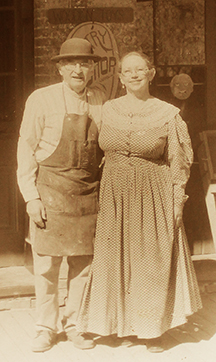 1978 January - Doug and Jo Cummings take over the carpentry concession. 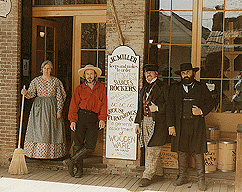