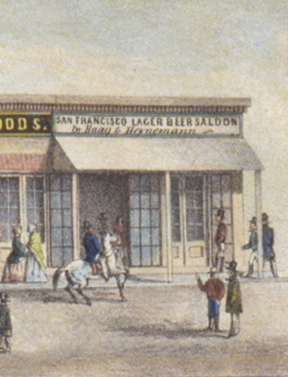 1854 October - Louis Schwartz buys the lot for $600 and has a 1 story brick building erected by November built by J.M. Bean. (see image above)

1857 Christine and David Oppenheimer buy the building for $2850 and run the saloon, at the same time E.S. Nassau has the Empire Variety store in the building. His business is also called E. S. Naussau Notions and Fruit Store. The building is purchased by Charles Oppenheimer for $3,000 in October.

1858 February - Isaac Oppenheimer buys the building for $7,000, the price includes the fixtures: "liquors, chairs, tables and saloon fixtures", and runs the saloon.

1861 July - Heynemann rents the building for a saloon.

1864 Henry Bornheim takes over the saloon.

Advertisement in the Tuolumne Courier - April 22, 1865

1965 Dale and Gladys Heric are concessionaires. 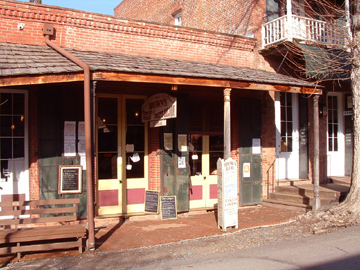