1850 Originally it is 4 or 5 lots and has several small stores on it, including the Boston Bakery.

1857 The lot is purchased by Charles Cardinell. (Architect, Musician, and Dancing Master who built a succession of such Halls in the Mother Lode.)

1857 July 30 - Cardinell buys the three remaining lots of the Boston Bakery on the north side of Washington.

1857 October 19 - Cardinell buys the last lot between the above two.

1858 February - Cardinell builds the hall and assembly building, 103 ft x 50 ft, 2 stories high. It has stores and a saloon on the first floor and a theater on the second floor. The theater has removable seats.

1858 February 15 - The first performance in Cardinell's Theatre was given. While the same room served as a theater and dance hall, for the latter purposes it was usually called Terpsichorean Hall. This was also on the second floor over two stores.

1861 May - Cardinell had sold his building to the Terpsichorean* Society which he had organized.

1861 The lot sells to the Columbia Terpsichorean Society who rebuild. Cardinell has a dancing school in the building.
Announcements in the local papers.

1865 July - The lot next to the Mason's was sold to Columbia Terpsichorean Society and building raised. 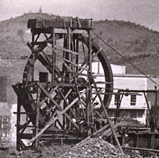 1870 fall, or 1871spring - The Bacon store at the corner of Main and Washington was removed.

1871 August 23 - The building had been removed from the theater lot and the property mined around the time Beauvais realigned Washington Street in his surveying.

1949 The state purchases the lot from William and Ruth Grant. 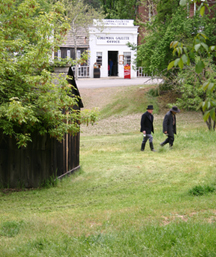 Lot in front of the Gazette.

*Terpsichorean
In Greek Mythology, the Muse of Dancing was known as the terpsichoros. (Terpsichore = delighting in the dance.)
The Terpsichorean Hall was a fancy name for a place to dance.
However it was considered humorous to call someone a terpsichorean; a dancer.
Terpsichorean means, having to do with dancing.