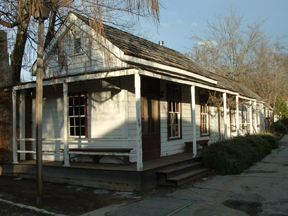 The current house is at least two houses joined together - 2007.


1853 Ferdinand and R. Yrizar sell to Juan Dupont who then sell to Benjamin M. Brainard and William H. Newell.

1854 Newell sells out to Brainard.

1878 S. & H. Levy end their business in this building. There is no more information on what happened to that prior building.

1865 April 22 - S & H. Levy are still running an advertisement in the Tuolumne Courer to sell off business goods as of the first of January.

1879 Shine sells to Frank Vassallo. For a while George J. Morgan has a meat market in the building. 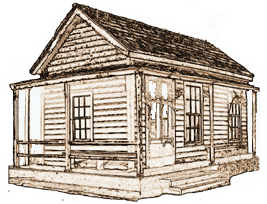 The western section of the house on the Levy lot.


1933 February - Mrs. Elizabeth Titchenal was living in the house.

c1936 Rex and Dorothy Nelson of the Candy Kitchen occupy the house.

c1985 The front room was remodeled and restored with the help of the Docent Association (cooperating association) of Columbia state historic park.

2000 The west part of the house is used for interpretive purposes with the theme being Dr. Tibbits home.

2007 More restoration was done on house. Thanks to the state funded Volunteer Enhancement project.

with a generous donation to FRIENDS of Columbia SHP.