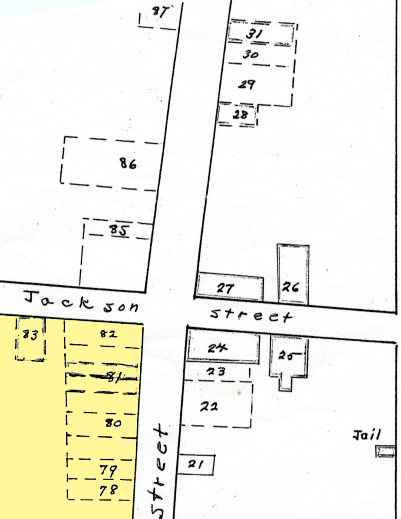 Forgotten Buildings is what Mrs. George W. Eastman called her compilation as she described (in 1954) what was here: Main Street East

1859 - Pechaud Brothers (#83) Building. Started in 1851. It was announced in a local newspaper on May 30, 1861, that the Pechaud Brothers, owners of the "French Store, on Jackson Street, " would begin selling off their extensive stock on Saturday, June 1. (G & B Eastman 1958)
Brothers Jean Pechaud and François Pechaud ran a grocery store and provision store, which they built with fireproof cellar following the fire of 1854. Known as the French Store, this would be the longest running French owned business in Columbia...(Confused with Brunet store) - (Then Came The French)
NOTE: There is a sloght chance that the actual store was between #24 and #25.