The churches settled mostly near the wildest establishments; North of town. (There were only 5 Methodist churches in California in 1850. It grew to 118 by 1860.)

1852 July 1 - The Methodist Episcopal Church, South had it's first meeting.

1852 December - the Methodist Church North (steeple in above drawing to the right) acquires the property of Hopkins Brothers Soda Works on Broadway north of Jackson. West corner of Green and Broadway streets.

1853 January - the Methodist Church South (tower in above drawing to the left) with the Masonic Hall (located in the upper story of the building). The pastor was Reverend Minear. South-west of Jackson Street where the 49ner church now sits.

1853 January - the second Catholic church was erected on the east side of Gold Street near Broadway. The first priest was Father Henry Aleric.

1853 July - the North Church is completed by Frederick Salter. Dedicated on the 11th. A. S. Gibbons, pastor of the Methodist Episcopal Church North, advertised "Divine service will be held every Lord's-day, at 11am and 3 pm."

1853 October 28th, Friday - "And now comes pealing forth the notes from the church bell, to remind people, that there is a lecture, this evening, how sweetly it sounds..." (From Clementine Brainard's Diary)

1853 From the diary of Clementine Brainard, "Sunday November 13th. ..attended church all day, the minister was not very interesting in the forenoon. In the afternoon he was more interesting than usual, though that is not saying much, for Methodist ministers are not so interesting generally as others." 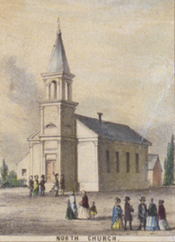 1854 February 5th - The Rev. Dr. Matthew Simpson was elected to the Episcopacy of his denomination by the M.E. General Conference, May 1852. In discharging his duties, Bishop Simpson visited and presided over Conferences in all of the States encompassing the M. E. Church as well as most of the related U. S. Territories. He preached at the M. E. Church, North and Clementine was impressed, "..it was truly a feast for the soul. Could we have much preaching occasionally I think all would be benefited by it, no one could listen to this preaching without being benefited by it: he is truly the most talented speaker..."

1854 Reverend E. B. Lockley succeeds Minear of the Southern Church.

1854 March 13th - "The new minister and his family came into the place (on) Monday.....like his appearance much" (From the diary of Clementine Brainard) A Reverend Briar succeeded Gibbons.

1854 March 19 - The Alta states that there were three churches in town. The two mentioned above and a Catholic Church.

1854 April 9th, Sunday - "Attended Sabbath school, went to church at the South this forenoon the Presiding elder (Reverend E. B. Lockley?) preached, not a very talented speaker." (From the diary of Clementine Brainard)

1854 May 14th, Sunday - "Very stormy and unpleasant this morning but few out to Sabbath school had no preaching this forenoon, this afternoon Mr. Bryer preached at the South Church." (From the diary of Clementine Brainard)

1854 May 28th, Sunday - "Went to Sabbath school but few scholars present; had but two scholars in my class; went to Mr. Lockley's meeting....till the close of the sermon, and then went to the Catholic meeting; there were seventeen confirmed; and such ceremonies I never before witnessed; it was translated into English. The Archbishop was present - their ceremony was lengthy, no charge given to those that joined them; it seems strange that a person of sense ever could be a catholic." (From the diary of Clementine Brainard)

1854 June 4th, Sunday - " Was almost sick this morning, did not go to Sabbath school or church, went to church this afternoon, our church (North) has been reopened, it looks very well indeed." (From the diary of Clementine Brainard)

1854 June 5th, Monday - "...the minister called on me, and stopped about an hour; he talked considerably about uniting with the church, think I shall not do my duty if I do not...but I think I shall never do it then, for I do not feel that I can unite with the Methodists: think now if there was a Baptist or Congregationalist church here I should unite with it, for I think it would be a shield to me, and I could enjoy myself better." (From the diary of Clementine Brainard)

1854 From the diary of Clementine Brainard, "Sunday Dec. 24th, a very warm day. The new Presbyterian minister preached. This was his first Sabbath since he was hired, he (Brodt) is liked much."

1855 Father Daniel Slattery is summoned to help Father Aleric and a drive began to gather enough donations to build a bigger church.

1855 From the diary of Clementine Brainard, "Sunday Jan. 14th, The merchants all came to an agreement to close their stores on the Sabbath after the 1st of Jan, ...but today most of them have opened...."

1855 March - the Methodists merge and sell their South Church to the Presbyterians. Under Reverend J. H. Brodt. (St. Andrew's was organized by Reverend Mr. Brodt, who in typical fashion for Columbia's preachers, left town almost as soon as he arrived; Four months.) The church is called St. Paul.

1855 May 20 - From the diary of Clementine Brainard, "It has been very stormy the past week & today it has stormed as hard as I ever saw it: there has been no service at either church."

1855 June 3 - From the diary of Clementine Brainard, "Have been to church this afternoon - liked the new minister very well."

1855 September - Laurentine Hamilton is the new minister for the Presbyterians.

1855 From the diary of Clementine Brainard, "Sunday Oct. 6th (7th), Have been to church today: Mr. Hamilton preached, - liked him very well, but not as well as Mr Brodt; hope he will be a profitable preacher for this place."
(L. Hamilton Clergyman from New York. Under his leadership the church at the "plaza", prospered so much that less than two years later in 1857 they complained about the bldg. being too small.)

1855 October 27 - From the diary of Clementine Brainard, "Mr. & Mrs. Hamilton left this evening (They had stayed five days with the Brainards.): found them very pleasant people, liked them much better than I anticipated; hope they will be the means of doing much good in this place"(Clementine Brainard became a mother of two, a widow and finally a business owner before she left Columbia and moved back to Maine in 1858.)

© Bancroft Library.
Odd Fellow Bldg. on the corner of Jackson and Broadway before the fire.

1855 Columbia Hebrew Society were suppose to have held synagogue meetings (There were no known synagogues in California by 1850. By 1860 there were 5 known synagogues.) in the lower half of the I.O.O.F. building. (American Odd Fellowship is regarded as being founded in Baltimore in 1819, by Thomas Wildey, and the following year affiliated with the Manchester Unity. Within a few years the new American separated from the English Orders and formed the Independent Order of Odd Fellows.)

1856 St. Anne's takes permanent residency on Kennebec Hill. Father Daniel Slattery is its first priest. The church was designed by a young surveyor from England, John Wallace. Bricks were made at Shaw's Flat kiln. Timber from Saw Mill Flat. Theodore Hittell commented on the building's "beauty and elegance" and that it will "do honor to the Creator of the universe..." "The church would be called St. Anne's, for the patron saint of miners the world over, and stand with its cross shinning out white and high on Kennebec Hill." - from the book "Oh Glittering Promise!" by Anne Fisher - 1949.

1857 The belfry and bell are added to St. Anne's. The bell was cast in New York for $1500 and brought around the horn to San Francisco, before arriving in Columbia.

© Bancroft Library.
Masonic Hall on the corner of Washington and Broadway Streets.

1858 Rosh Hashana services were held in the Columbia Masonic Hall.

1858 The old Church Plaza which was between the South and North Churches is now known as "Jackson Square". 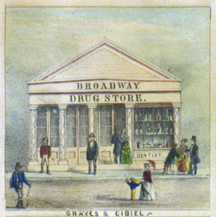 1862 July 27 - The Baptist purchase the old Broadway Drug Store of Kelton and remodeled it for their church. The church is dedicated by Reverend J. Buff of Sonora. The church was active for nearly ten years.

1863 Reverend A. Clark is the Baptist Clergyman.

1864 The South Church also known as St. Paul was torn down.

1865 January - Reverend Henry Palmer is pastor at South Church. This same year a Reverend Arthur Hill creates a scism by naming a church St. Peters. A fight over money ends with a large two story frame building is moved from the corner of Gold Spring and Maiden Lane to Jackson Street.

1870 The 8th of July census shows D.A. Spillman, a 28 year old from Ireland as a Catholic Priest. 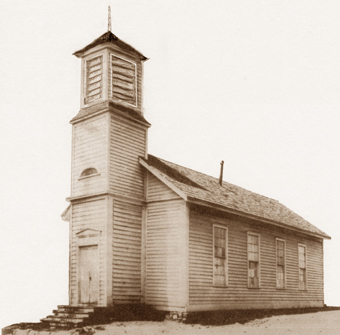 1926 June 15 - Through the efforts of local citizens, Native Sons of the Golden West, and Knights of Columbus, St. Anne's is opened and rededicated.

1945 When the state made Columbia a state park the only churches still standing are St. Anne's and St. Andrew's. 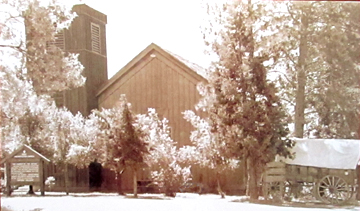 1974 St. Anne's is declared unsafe and closed. The diocese was prepared to give the church to the California State Park System without realizing the local interest in preserving St. Anne's as a consecrated church.

1978 August - under the leadership of Angela Brown, the Save Our St. Anne's Committee was formed, composed of members of old Columbia and Sonora families, to save St. Anne's Church and keep it within the community of the church.

1981 St. Anne's reopened and stays within the community of the church and was rededicated by then Bishop Roger Mahoney in a Solemn Eucharistic Celebration.

1995 St. Anne's Church paintings were cleaned and touched up by Ann Whitehurst.

2006 November - Bishop Stephen Blaire presided over a mass celebrating the 150 anniversary of the St. Anne's Church.


TODAY The Church of The Forty-Niners is a working Presbyterian
and sits where the South Presbyterian Church use to be.
(at 11155 Jackson & Gold Streets (209) 532-2441)
For a list or pastors over the years view this page.

TODAY St. Anne's offers half hour tours for school classes
which are available Monday through Friday, 10am to 3pm.
A docent will bring to life the history of St. Anne's Church.