1851 Piley and Marshall have a wood building on the corner lot and run the Columbia Market.

1853 Napier Soderer becomes a partner in the firm known as Henry Piley & Co.

1854 Piley leaves. The building burns and is rebuilt of wood. Soderer and Marshall purchase the lot west of the building.

1857 The building burns again, this time they build a brick structure across all the lots containing 4 stores. The market moves. The partners rent the corner building to John B. Douglass who runs a very popular saloon with an aviary, paintings, fish, geological display and is also a stage depot.

1870 The building sells to Edmund Parsons who re-opens the saloon.

1873 The building and business sell to William Siebert and Frank Vassallo.

1902 Siebert sells a half interest to Matthew Brady who changes the name to the American Saloon. 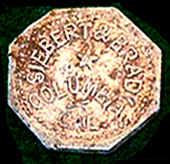 1903 Siebert sells remaining half interest to Matt Brady. The wall between the butcher shop and the saloon are removed and the bar lengthened.

1930s Mrs. Amanda Crook owns the bar, gives Christmas parties and is a general benefactor to the old miners, it is called The Stage Driver's Retreat. 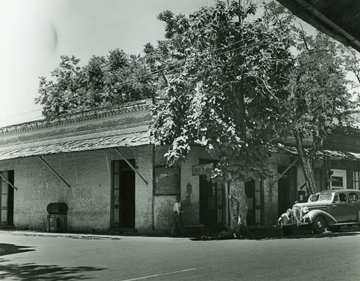 1952 The state purchases the building and lot from Pearl Marsh and Leon Ponce for $7500, they had purchased it from G.E. and Eleanor Martinelli

1952 A lean-to with restrooms was removed and modern restroom buildings erected.

1968 Building closes for $50,000 restoration and reopens as the Jack Douglass Saloon.

1969 31 May - Joseph Corrente of the Stagedriver's Retreat has a 5 year contract that is assigned to William CLever. (Park & Concessionaire report 1969-70)

2000 Concession closes. Park starts replacing floor in the back including removing wood lean-to on the north side of the building.

2003 New improved bathrooms are built in the rear.