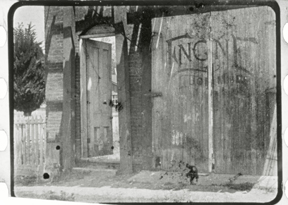 1852 May - the lot sells to Septimus Cleveland and James Gardner.

1854 July - After the fire, Cleveland was able to get enough money to build a one story brick building by selling 3 mortgages, McChesney owned two, Brazee had one.

1855 McChesney gives his mortgages to Brazee. The building is occupied by E. B. Shaw and W. H. Brown's family grocery.

1856 The partnership dissolves and Shaw continues the grocery.

1857 John and William Wheeler rent the store, by this time Brazee owns the building.

1858 The building sells to Ward G. Pike in a sheriff's sale. He later sells to William Wheeler.

1861 March - Wheeler, who was on the board of Tuolumne Engine Co. #1, sells the building to the engine company for use as a firehouse. The front of the building was remodeled to make double doors for the engine.
(see the history of the engines and companies.) 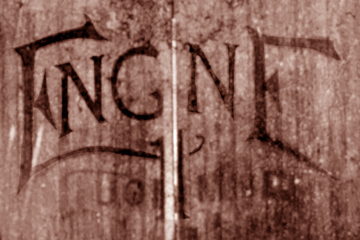 1910 April - the Columbia and Tuolumne engine companies combine to form Columbia Engine Company #1 and move to the new firehouse on Main Street. Mrs. Dante Cinelli purchases the old building and uses some of the bricks to repair the City Hotel. 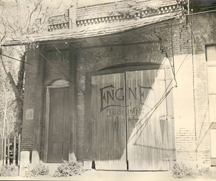 1953 The state purchases the remains of the building (the front wall) and the lot from Columbia Engine Company No.1 for $450.

1955 Building restored. Original doors are in the chief's office, in the back room of the building. 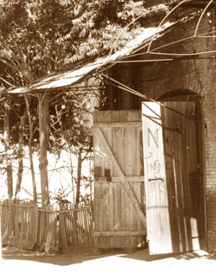