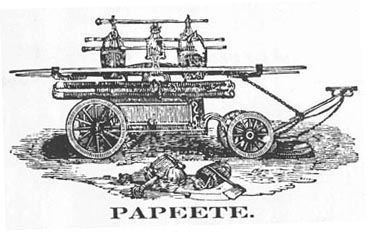 In the Spring of 1852, Colonel Thomas Nugent Casneau, owner of the Columbia Exchange Hotel, organized a Hook & Ladder Co. and a military company of militia which would later be called the Columbia Fusiliers. Meetings of both companies were held in "The Exchange." Both companies paraded in the 4th of July celebration of 1852, the first to be held in the county. The Hook & Ladder Co. was presented with their first banner by Mrs. Campbell, a well known actress. Late in February they gave a ball at the Italian Saloon, and on March 4th a Grand Inaugural Ball at Dan Patterson's Saloon.

John Leary, who had been elected town Constable in September, 1851, was also a foreman of the Hook & Ladder Company.


July 10, 1854 fire destroyed most of town and the valiant efforts of the volunteers caused damage to the equipment of the Hook & Ladder Co., and the company temporarily disorganized. Lee & Marshall's Circus did a benefit to aid in replacing their apparatus, in November.

July 31, 1854 - "The people of Columbia were somewhat excited by the examination of 'Babe,' who was charged with setting their town on fire three weeks ago. It is understood the testimony was entirely circumstantial, and it appears that the evidence is insufficient to warrant the Justice in committing him. However, from the general feeling envinced by the citizenry, Babe would be wise to spend his time in some other locality, least he wear the hemp collar and hang from the flume." - Sonora newspaper.


March 31, 1856 John Leary organized the Hose Company. They built a two-story frame house on Fulton Street with quarters for their hose carriage and equipment on the lower floor with their meeting place upstairs.

August 25, 1857 fire broke out in a Chinese shanty on the north side of Jackson Street. Most of the wood structures were lost and the brick buildings survived (except for Brown's store, which exploded). After the fire the Hook & Ladder Co. reorganized and called themselves the "Phoenix Hook & Ladder Co."

January 1858 John Leary assists in the creation of the Columbia Hose Company. The town trustees allowed them $450 for a brick carriage house and a new hose. To be constructed on Fulton Street.

November 28, 1858 John Leary is attending a fireman's ball and in the uniform of the fireman when he was called out as Constable to do his duty and was killed by robbers. Many mourned his death.

Early 1859 the Tuolumne Carrier carries a few articles signed "Fireman" who demands that something be done and suggest hand pumps.

September 16, 1859 a group of Columbia women put on an "Engine Festival" at Cardinell's Theatre. Tickets were $3 which included dinner and dancing. Other women collected from willing donors and within a week the "Ladies Committee" had raised nearly $2000. Some small minded men felt outdone and were angry.

October 1859 Fireman Harry Tinkum examined a handtub in San Francisco. With the help of Brigadier General T. N. Cazneau, now of San Francisco, they went to investigate the machine. 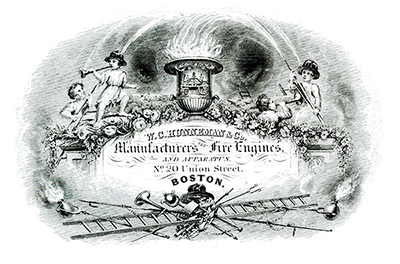 EARLIER HISTORY of PAPEETE
(with supplimental input from Richard Yokley)

1855 - Engine No. 452 returned to Hunneman (Phenix Engine 12 wanted a larger pump) to be rehabbed, repainted, and renamed "Papeete" for sale to the Society Islands (Tahiti). Papeete is the capital of Tahiti and interestingly, Papeete in Tahitian, means "water from a basket."

1856 December 1 - #452 now named Papeete was placed aboard ship for voyage to San Francisco to be shipped around the Horn to San Francisco then to Tahiti, but the Society Islands obtained a fire engine and no longer required Papeete. King Kamahamaha IV of the Sandwich Islands (Hawaii) purchased the engine leaving name and female nude paintings intact. The ship left Boston, sailing around the Horn stopping in San Francisco for supplies and dropping off passengers and material. The typical voyage took 5 to 8 months. Legend has it that when the ship reached San Francisco the crew, including the ship's Captain jumped ship to go to gold territory. Papeete stayed in San Francisco and later at a large fire, the engine was needed and put in service. 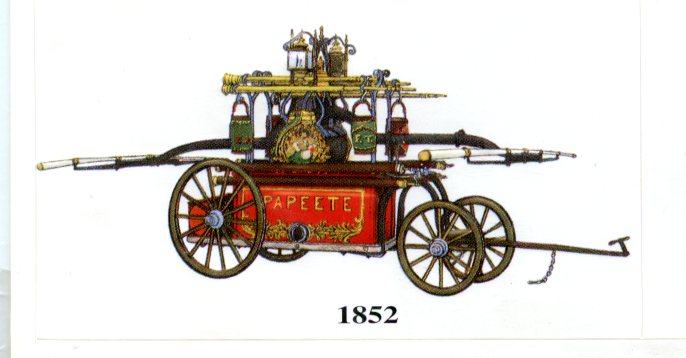 1855 November 6 - replacement engine #558 delivered to Phenix E12 (Presumably that is when #452 returned to Hunneman in Boston). (per actual Hunneman & Co. records)

1859 October 14 - $1800 is paid for Papeete. Cazneau was instrumental in getting the Steam Navigation Company to take her to Stockton, gratis and Fox & Co. took her to Columbia by big wagon, again at no charge. The engine was painted rose-red, striped with black and heavy gilt, with brass mountings and ornaments, two magnificent lamps, bell, buckets, axes, etc. On either side of the high frame, above the body of the engine were "splendidly executed Sandwich Island angels, something like the complexion of a new saddle." They were much concerned as to what the Columbians would think of these nude bathing figures and so he had taken the responsibility of having "nice screens fitted over them, till you can arrange with Joe. Spier for a full set of extra-full hooped fixings."

October 21, 1859 Papeete is renamed by the Ladies Committee, "Tuolumne Engine No. 1"

October 22, 1859 Papeete arrives and is installed at Marshall's brick building on Broadway.

Page created for the public by
Floyd D. P. Øydegaard