1860 The Tuolumne No. 1 and Columbia No. 2 companies were having difficulties with housing and votes and Trustees. 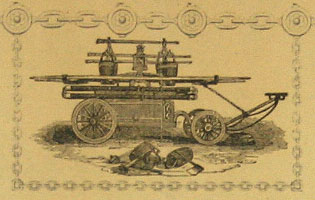 1860 March - John B. Douglass was elected Chief engineer. (He was elected every year until he relocated in Stockton 1869). Some records show that he may have served in 1857 acquiring 12 years as Chief of the City Fire Department. But records aren't clear.

1861 February 22 - The ladies of Columbia presented a banner to Columbia Engine Co. No. 2. The banner still hangs on view in the Columbia Volunteer Fire Department office off Jackson Street.

1861 March 30 - Columbia No. 2 challenges Tuolumne No. 1 to a friendly trial of power and capacity. The contest was to be at the cistern on Broadway near the Fallon Hotel. From 2:00 to almost dark thousands of people saw the two engines put to the test. Engine No. 1 (Papeete) won the first 4 trials and Engine No. 2 (Monumental) won the last 3. The Engine No. 1 received the coveted "Cock and Broom" banner.

Cock to crow victory and the broom to sweep the losing Co. down Matlot Gulch.

1861 July 27 - Although two new cisterns were soon built, the new hose was not at once supplied. As a result, when fire broke out in the rear of the Eagle Cottage on Washington Street, it swept through all of the frame buildings between Main Street, and Broadway, north to State Street, two entire blocks. Some of the property would have been saved if No. 2's hose had not burst.

1861 July - Tuolumne No. 1 received a silk American flag, made by two ladies.

1861 September - Columbia No. 2 heads for a fire down Main Street and Udo Van Keller grabbed a rope to assist and fell under the wheel of the heavy machine and was crushed to death.

1861 December 4 - Columbia No. 2's first Annual Ball was held. The weather postponed the normal date of the ball November 27. The annual ball continued in November until 1868. Their balls change in the 1870's to Washington's Birthday and last into the 1890's.

1864 October - Columbia's Chinatown has a fire. Both companies managed to stop the fire with only two buildings lost. Fire proved to be arson.

1865 June 5 - Columbia has a fire. Accidentally started in a stove pipe at a bakery on Jackson Street, this fire nearly wiped out Chinatown and the two story building on the corner of Jackson and Main Streets, the Long Tom Saloon. Chinese rebuilt, as did the owners of the saloon.

1882 September 10 - A Chinese Opera House or theater built on Main Street north of Jackson in 1881, is destroyed in a fire, along with eight other buildings. Valiant efforts by the fire companies were made to halt the fire before it could spread into the city.

1882 September 16 - "Fire in Chinatown - The Fire Department was promptly on duty and did good service. They extenguished the fire, in a solid block of wooden houses, after it had made a clean sweep of all the buildings on the west side of Main Street, half way down to Jackson Street, The charred walls of the buildings in the outskirts of the surrounding ruins testify to the gallantry and efficiency of the Columbia Fire Department. No. 1 Engine took postion at the cistern on Jackson Street near Main Street nearest the scene of the fire, but were compelled to abandon it before getting to work, the heat was so intense; they, however, soon rallied, removed their scorching machine and took suction from the cistern on the corner of Broadway and Jackson Streets and got a stream on the left flank of the fire and headed it off in Ramon's hay barn, which was burned with three tons of hay. The total loss by fire is estimated at $5000. The fire is supposed to be the work of an inceniary.
"E. Heinckleman, a member of No. 2 Engine Company fell and was run over by a hose carrieage and quite severely injured about the head, though not considered dangerous." (Source: Tuolumne Independant)

1885 All of Chinatown north of Jackson lost to fire.

Columbia Engine #2 Company with Papeete as they looked in 1900

1903 July 4 - Images were struck of Tuolumne No. 1 with 27 men in brass buttoned uniforms in front of their Engine House on State Street. George Napolean was foreman. Columbia No. 2 was before their engine house on Main Street, with their flag and bunting draped jose carriage, 15 men in uniform of black pants, white shirts and fireman's helmets. 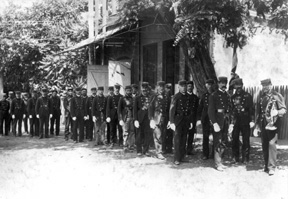 1910 April - Tuolumne Engine House No. 1 and lot on State Street is sold and the building is torn down and the bricks are used to build a new building on Main Street. 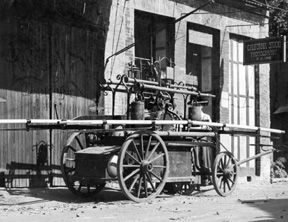 1931 Tuolumne Engine No. 1 continued to service the town until the first motorized equipment arrived. 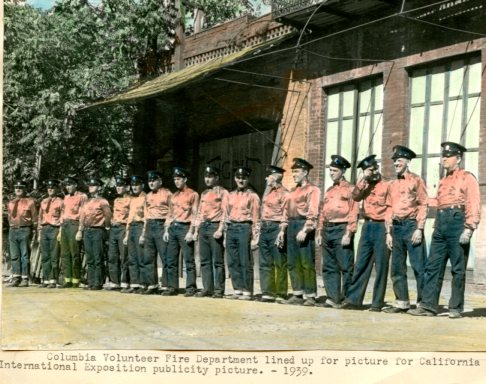 1939 Columbia Volunteer Firemen line up for a picture to advertize the California International Exposition.
- 1939 image by Otheto Weston.

2004 The restored hand pumps have a firehouse of their own.

Papeete or Tuolumne No. 1, has been painted up as she looked in 1859. Papeete is housed in a reconstructed firehouse on State Street called Tuolumne Engine Co. No. 1.

Monumental or Columbia No. 2, has been painted the way she looked in 1860. She is housed in the 1911 building called Columbia No. 1 Engine Company. Both handtubs compete in our Annual Fireman's Muster.

Citizen No. 1 Housed in the same building as Monumental is the little town of Standard's hand pump.

As of 2015 - The Handtubs were moved:
Papeete and Monumental are housed on Main Street in the 1911 building called Columbia No. 1 Engine Company.

Read more about Citizen #1 which was sent back to its place or origin.

Page created for the public by
Floyd D. P. Øydegaard