1853 May 29 - Women are not very plentiful here (Columbia). There are some Spanish/Mexican), Chileans, and French as well as a few American women here but they are principally all fast, or women of bad repute. So, it is best not to have anything to do with them. (from a letter by David Baer Hackman in A Pennsylvania Mennonite and the California Gold Rush by Lawrence Knoor 2008) Note: It is clear by Hackman's comments that there were many prostitutes here in Columbia early on. That the Chinese women made the largest numbers. See the 1860 census below.

1854 April 7 - When David Baer Hackman was asked by his brother a year later how the female population was in Columbia, Hackman answered, "...whether I have any ladies here, I would state that I have none. But there are a great many women here - mostly all foreigners and of these the Chinese are the most numerous and the next in numbers are the Spanish, Mexicans and French, besides many other nationalities of smaller numbers. There are not many American ladies here yet and those which are single are not of the right stripe. Consequently, I have nothing to do with them." (from a letter by David Baer Hackman in A Pennsylvania Mennonite and the California Gold Rush by Lawrence Knoor 2008)

1855 May - "There are two theatres, two large fandangos or Spanish dance houses, six public gambling saloons, and ten public houses of ill fame - some of them fitted up with gilded signs and wide-open doors. There are fourty places where rum is retailed by the glass and of all the stores, only one, is shut on the sabbath." - (From a missionary report on the conditions of Columbia in the "Home Missionary")

What were these houses of ill-repute called? Bordello is an interesting word not readily found in older dictionaries. It originates from the Old French for a board hut or "bordel," which means, a brothel, in Middle English that translated into a wretched person. Confused yet? However, a brothel, sometimes called a "boarding house", in 1850s was a house of prostitution. In my 1871 Webster Dictionary they discribe it as, "a house of ill-fame." - webmaster.

BIG ANNE owned a boarding house on Main between Jackson and Pacific. She was the earliest name listed as a prostitute and she was the "Madam" to Martha Carlos.

MARTHA CARLOS who also became a madam with her own establishment. Her story is the best known in Columbia. See her story. One of her "girls" was called Sally.

From the July 1860 Census, a known list of "filles de joie," listed as prostitutes.

Chinese Slaves From the July 1860 Census listed as a prostitute.

The Chinese women in California between 1850 and 1870 were mostly slaves to "benefactors" who collected a fee for their services to the Chinese miners and the local populace adventuring into their "cribs" for a price. These women were called "One Hundred Men's Wife"; in Chinese. One thousand Chinese males worked and lived in Columbia by the 1860's.

Chinese prostitutes were commonly known as women of the lowest order. "Both outcast slatterns and Asian slaves stood at the edge of the irregular marketplace, far more socially stigmatized than ordinary prostitutes." The demand for Chinese prostitutes in California was primarily due to the shortage of Chinese women and the prohibitions and taboo against sexual relations between Chinese men and white women. (The Chinese in California, 1850-1925)

When the fire of August 1857 destroyed a large portion of Columbia, killing 6 people in the southern part of town the Chinese of Columbia's Chinatown were told to relocate away from the "center" of town. The prostitutes knew their clientèle were in Columbia and found places to stay in and around the north portion of the city. The census bares this detail out.

(The prevalence of the name Ah in many references to Chinese people in original sources is a good example of how Chinese names were miss-interpreted. Ah is not a Chinese name, but is a prefix added to the personal name as a familiar or informal manner of address.)

WOW CHIN Chinese woman who owned a house in upper Main (above Jackson).

HOG MARY Chinese. "She was the queen of Chinatown. All the Chinks took orders from her. If she got ill she called in Doctor Sing Fong Toy and he gave her some China Herbs or other Chinese remedy and soon had her well.
"She bought her 'China Jin' and the liqors(sic) her customers requested, from Mike Rehms Pioneer Saloon, across the street. When she went to Schoetgens Barber Shop she said, 'He likee one dollar half Hog belly.'
"She liked to buy the Chinese Lottery tickets. The drawing took place every morning at Chinese Camp. A Chinaman who always rode a little black pony rode the 12 miles to Columbia. When he turned the corner of Washington and Main Streets he was soon spotted and both Chinese and white men gathered around him to see if they had won. One day Hog Mary won and was very happy." - Card by Otheto Weston from memories of Hubert Brady.

Sophia Lightfoot age 40 from England.
Uniford Staven age 30 with husband John (and two children) from Ireland worth $1000.
Matilda Lambert age 53 from New Yorkworth $700.
Amanda J. Moore age 26 from Maine worth $200.
Lucy Darling age 35 with husband Ebenezer of Vermont (and two children) she was from Maine worth $950.
from research notes of Bill Prindle

About SALOONS, or Entertainment Establishments.
About the word "Saloon." Many establishments used this word instead of the later morally acceptable "Salon." Both words have the same meaning. The Saloon spelling was used on signs for many early establishments not selling alcohol, i.e., Barber Saloon, Bowling Saloon, etc. It implied something better than what it really was. An 1871 Webster dictionary simply states, "An elegant and spacious apartment." Modern dictionaries give the same definition showing that the word once meant any lavish building used for entertaining or for commercial reasons. In the 19th century it could be a social gathering place of high esteem. Some saloons were created with high standards and the title fit. A businessman would never call his establishment for what it really was, "Smith's Sleazy Slum," or "Daniel's Den of Inequity," or "Floyd's Flop House." Today we seem to lock the word up with a drinking hall.
In Columbia, during her prime, many of the drinking saloons were close to houses of ill-fame. It is important to note that even though women had the right to own businesses, the type of business they ran usually set her into a moral category that was below the accepted standard of "high moral character."

1858-71 Marquita's Fancy Saloon. AKA House of Marquita. (Located North of Jackson and Southwest of Main St. Across the street from Questai’s Fandango)

Female saloon owners or bartenders from the July 1860 Census.

Known Actress/singer/performers who may of come to Columbia.

ELIZA PITTSINGER poetess of the 1850's California. Mrs. Eliza A. Pittsinger, poet, was born in Westhampton, Mass., on 18 March 1837. Her earlier careers included teaching and proofreader/reviewer. She eventually came to San Francisco around the time of the Civil War, and except for a period of eight years, stayed there until her passing on 22 February 1908. 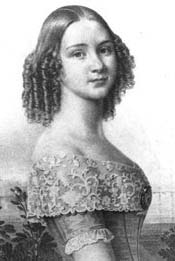 JENNY LIND Born Johanna Maria Lind (October 6, 1820 - November 2, 1887), better known as Jenny Lind, was a Swedish opera singer, often known as the "Swedish Nightingale". One of the most highly regarded singers of the 19th century, she is known for her performances in soprano roles in Sweden and across Europe, and for an extraordinarily popular concert tour of America beginning in 1850. She was a member of the Royal Swedish Academy of Music from 1840. Her "only" connection with Columbia was that her name was used on a few restaurants in her honor. 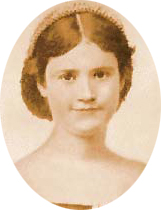 LOTTA CRABTREE Born Lotta Mignon Crabtree was on November 7, 1847, in New York City to Mary Ann Livesey Crabtree and John Ashworth Crabtree, immigrants from England. The miners in the Sierra of Northern California were used to the loneliness, dirt and disappointments that came with the search for Gold, but Gold of another sort appeared in 1853 to ease this routine and her name was Lotta Crabtree. The tiny, red-haired, six-year-old jigged and danced to their clapping hands, while they showered her with nuggets and coins. The quintessential female entertainer of her time and a true child of the Gold Rush, Lotta Crabtree was raised in California's gold country and performed in the vaudeville houses of San Francisco. She became the most popular comedienne of her era and the highest paid performer on the Broadway stage.

CAROLINE CHAPMAN Caroline Chapman was born in London c1818 and raised by her father to become an actress and entertainer. The child made her juvenile acting debut in 1829 at the American Opera House. In 1831 William Chapman installed his family on a riverboat on the Mississippi which became "Chapman's Floating Palace." The young girl acted primarily in soubrette roles, performing as comedienne, dancer, and singer. Caroline Chapman returned east in 1846 and played from 1848 to 1852 with Burton's Theatre in New York, then pursued a career in California, where she performed in San Francisco and the Gold Coast for five years. Famed as an itinerant trouper, she was admired for her versatility in tragic, comic, and romantic roles. Chapman was beloved for her boisterous stage manner, but after 1857 her style grew dated and she began to lose her following.

CLEMENTINE BRAINARD becomes the owner of her husbands property on his death, June 29th, 1856. She maintains the store(s) until 1858 when she moves back to Maine. By 1867 - she sells her remaining property.

The Women Who Started Towns.


1850 In the same month that witnessed the finding of Columbia, Springfield also took its rise. Its history is interesting, as evincing the energy and business talent that a woman displayed. In the latter part of March, Donna Josefa Valmaseda arrived from San Francisco. Previously she had been an influential resident of Guaymas, Mexico and in the war against the United States she had been a strong partisan of the latter country, giving aid and countenance to her country's enemies. Acting upon information furnished by her, the town of Guaymas was taken by the United States ships "Cyane" and "Warren." This course brought down upon her the vengeance of the Mexican Government, and she was compelled to fly to the protection of the American men-of-war, abandoning her property, which, according to usage, was confiscated. After the breaking out of the mining excitement she came to the mines, where she collected a number of her countrymen, whom she hired to mine at the place now known as Springfield; so called because of the remarkable spring which breaks out of the limestone at this place.

In a like manner, Donna Martinez settled at the camp which bore her name. Her location was in the midst of very rich deposits, and the camp increased rapidly, soon containing over a thousand miners. The town Martinez was settled In May or June.
A History of Tuolumne County, California - B.F. Alley, 1882

Other sources:
census information, noted by (P51-L8), comes from the diligent research of Bill Prindle.