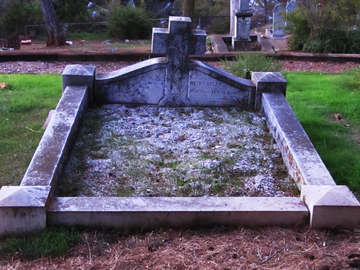 History Note: The cemetery on the hill in front of the church was actually being used several years before the church was opened. The construction of St. Anne's was completed March of 1856.

ALEXANDER, Adeline C. - Born in Sonora 7 June 1921 - Died 15 June 1921.
Note: Unfortunately the little marble headstone has been covered by a mudslide. It was a small, flat headstone. The first born of Mary and Jobe Alexander (See IOOF cemetery).

CONLIN Family Plot? - Somwhere in the cemetery was the place of burial for the following members of this Irish family: