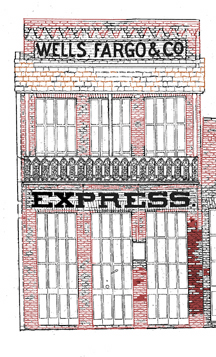 1852 Butterfield and other directors object to the proposal that American Express extend its operations to distant California.

1857 August 25th (Tuesday) - Fire rages through town. Wells, Fargo Express office is burned. (Actual location not known for sure; it is assumed the same location where the building is today)

1857 The American hotel burns in the August fire, William Daegener rebuilds of wood; later in the year he builds a second frame building on the lot housing Sturzenegger and Newman's saloon. (Where current Wells Fargo building stands.)

1857 August 26th - Wells, Fargo & Co. were finishing a frame building on the old site that evening. (from Sacramento Daily Union)

1858 Daegener replaces his wood structures with brick. The two story building cost $4400, the one story $2375. The Wells, Fargo office moves into the two story building, with the Daegener family living upstairs. Hostie has a store in the other building. "Wells, Fargo built a new brick with a fine iron balcony brought all the way from Troy, New York," so quoted the author (Anne Fisher) from the fictional account of Columbia's past, "Oh Glittering Promise!" 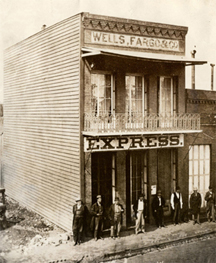 1860 Census reports: William Daegener 39 year old from Prussia with $9500 personal worth. Listed as an Express Agent, living with Maria age 25 from Prussia and their children, born in California; Hetty age 4, William age 2, Emma age 2/12. Also in the household is Amy Martin age 22 (servant) from Ireland.

1870 Census reports: Henry Sevening 37 year old from Prussia is a grocer with $11,000 personal worth with wife Louisa age 26 of Bavaria and their children; J.A. age 9 and Frederick age 6.

1884 Sevening sells to Tom Conlin. Conlin had the Wells, Fargo office, telegraph and a store in the building.

1903 10 July - Thomas Conlin was working the Wells Fargo & Co., Bank in Columbia as the manager. The image above shows a check made out on the Bank that is personalized with the his name and written to a William McClarren. (On March 18, 1852, Wells, Fargo, and others formed to provide banking and express services in California.)

1914 Wells, Fargo closes their business, Conlin continues his other businesses in the building, and lives there with his sisters, Maggie and Julia.

1930 January 10 - Conlin dies, and the building is owned by the Wells, Fargo & Company, who allow the Conlin sisters to stay there. 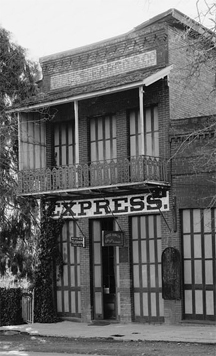 1954 May - the completely restored Wells Fargo buildings were dedicated. The "magnificent gold scales" received in 1854 were returned to the counter, where they were estimated to have weighed some $55 million in gold dust.

The building has since been a static display used in many western theme films over the years. It has also become a "trade mark" for Columbia State Historic Park. 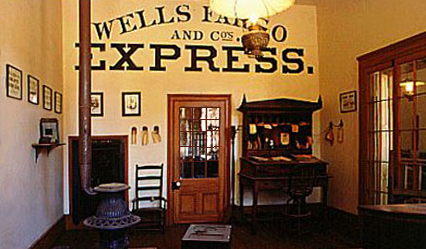