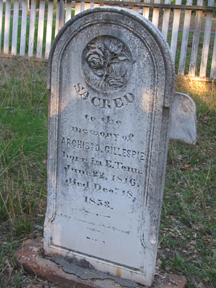 Map Locator: Masonic Cemetery
History Note: The Columbia Grand Lodge No. 28 of Free & Accepted Masons
was created July 1852.
Freemasonry is a fraternal organisation that arose from obscure origins in the late 16th to early 17th century.

ARNOLD, (baby) - No.81 Child of Robert Arnold (Robert was the son of Sam Arnold)

ARNOLD, Samuel - No.32 Died 16 Jan 1855 Note: First president of Columbia Trustees. (This grave is in the same condition as No.31(Mumford); somewhat obscured being quite covered by curbing of M.W. Parsons & Bros.) Mrs. Arnold is also here died 21 Dec 1859

DORNAN, John M. No.? Born in Belfast, Ireland c 1807 - Died Dec 7, 1862 of Scarlitina. "He was Senior Warden at the time of his death. He was an excellant representative of the Column of Strength in Columbia Lodge No. 28 F & A M. (Also an Odd Fellow and had the largest funeral recorded by the lodge: Ben Harrison's was a close second." -Masonic record.

DRAPER No.29 Died of Apoloplexy 27 January 1890. Found dead in the bed at the residency of Mrs. S. Knapp

FIELDS, Dr. George A. No. 23 died 2 Dec 1853 age 24 years. Note: First one to be buried as a Mason. Clementine Brainard mentions in her diary, "Sunday...attended Dr. G. Field's funeral at the south church. The exercises were very interesting as he being a Free Mason was buried in the Masonic style – never saw anything of the kind before."
A Masonic funeral, was performed with the reciting of ritualistic verses, each Mason in attendance, dressed in a uniform with a white apron, circled the coffin and placed a sprig of evergreen from his lapel into the deceased's upturned palms. The evergreen symbolized the Masons' farewell to one of their own. The departed's Masonic apron was draped over the side of the coffin and a wreath was placed next to it.>

FRANKLIN, Mrs. Dr. No.? Died at the residence of Jos. Pownall of paralysis. Joseph's sister-in-law.

JOLLY, John William No.105 Born in Gold Springs 28 Feb 1865 - Died 1882 (HT47) in Stockton at the Asylum of Fits caused by a childhood accident
(Constructed as the Insane Asylum of California at Stockton in 1853. The legislature at the time felt that existing hospitals were incapable of caring for the large numbers of people who suffered from mental and emotional conditions as a result of the Gold Rush, and authorized the creation of the first public mental health hospital in California) Bro. John Jolly was John W.'s father.

LEWIS, Malinda Matilda Manchester No.157
Born in West Greenwhich, Kent Co., RI c1841 (1833) - Died 25 August 1875
She is buried first at Langworthy, Tuolumne Co.
There is an Obelisk with her name on it in Oakdale.
Daughter buried her next to her husband in Columbia with the Masonic lodge's permission in 1885.

LORING, John M. No.74 Born in Sterling, Mass. 17 Jan 1824 - Died in Shaws Flat 15th Jan 1872 aged 48 years, probably of apoplexy. (HT15)
(apoplexy used to describe any sudden death that began with a sudden loss of consciousness, especially one where the victim died within a matter of seconds after losing consciousness. Those reading historical documents should take into consideration the possibility that the word "apoplexy" may be used to describe the symptom of sudden loss of consciousness immediately preceding death and not an actual verified disease process). Found on the floor in his room at A. Bullerdieck's. Tombstone 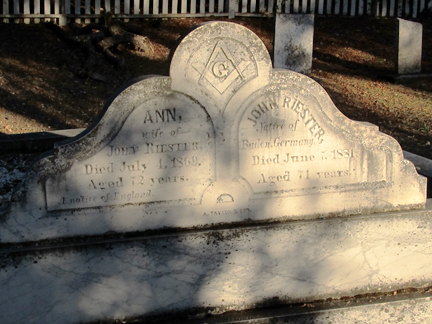 RILEY, Charles R. No.25 Died of consumption 19 March 1873 at the house of Thomas Northrup.

SEARS, Alden No.45 born 1798 in Vermont, who was the husband of Caroline Carleton Sears of daughter Miss Ellen Sears (Mrs. E.E. White), Died 8 Mar 1861 at age 63 of apoplexy. (HT25) Tombstone states: "In memory of ALDEN(backward'N') SEARS Died March 8th, 1861 Aged 63 years."
(apoplexy used to describe any sudden death that began with a sudden loss of consciousness, especially one where the victim died within a matter of seconds after losing consciousness. Those reading historical documents should take into consideration the possibility that the word "apoplexy" may be used to describe the symptom of sudden loss of consciousness immediately preceding death and not an actual verified disease process)

STEWART, John No.153 Died from the effects of sunstroke.

WILSON, James - No.59 Died of consumption 19th Dec 1876 aged 51 yrs. (HT10) "Brother Wilson had been sick for a long time but was feeling better and was in the act of getting into a buggy to ride to Sonora, when hemorage of the lungs commenced and died in a few minutes." -Masonic record. 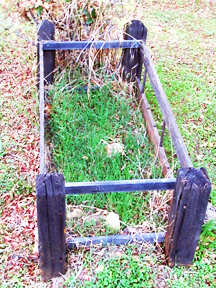 No.99 An unknown stranger who died in Bensonville between Columbia and Springfield.

NOTE: There may be more unknown sites.

Most of the above came from one or more of these sources: Masonic Record - 1883, Barbara Eastman - 1958, Hart Ralph Tambs 1987. ( His map was numbered by him and where any connection is made the intials HT and a number will be located at the end of the individual details which corresponds with his map), tombstones still remaining. 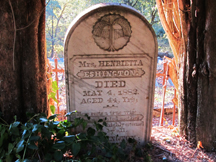