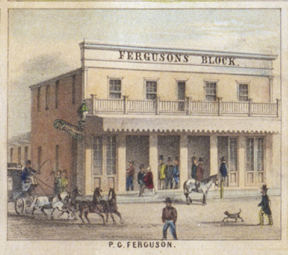 The Jenny Lind restaurant was in this building 1854.

Many former slaves (and Freemen) came west to help their slavemasters as a labor force, or came alone just to try their hand at digging up a better life for their selves and maybe a family. Their stories are written in the places they worked, ran a business and lived mostly unhindered.

Some letters sent home by various folk are similar in content to those written from the California diggings by thousands of other homesick miners to their families and friends in the Atlantic States. They contain a general smattering of information of interest to the historian - contemporary mining conditions, the price of provisions, mining litigation and some additional information about the pioneer history of an isolated area of this county of which relatively little is known.

The letters are more important because they were written by Southern miners who were using Negro slaves in their mining operations. According to Mr. Parks, all of the slaves who came to California were volunteers and all returned even though it would have been easy for them to have escaped and remained in California. One slave, Big Jim McElrath, married while in the diggings and upon his return to North Carolina was given a house and 40 acres by his master. Each slave was allowed to retain for his personal use the gold from one day's digging per week. The illustration accompanying the letters indicates that some of the slaves accumulated tidy nest eggs from their earnings. It is also interesting to know that the writers of these letters were from Burke County, North Carolina, an area which had experienced a gold rush of its own that commenced in 1828 and lasted for ten years. Presumably some of the North Carolina miners had had previous experience in the art of digging for gold. Unfortunately, little information is available about the persons mentioned in the letters. Few of them are listed in either the Federal Decennial Census of 1850 (taken in 1851) or the state census of 1852, and the isolation of the area precluded the publication of much local news in the newspapers at Columbia and Sonora. (see Sonora Chispa collection for the letters) (C. M. De F.)

1859 August - Tuolumne Negroes gathered at an elaborately planned celebration of the West Indian emancipation. This brought together Negroes from Columbia, Angles Camp, znd Jamestown. It featured a wide variety of speakers, including a West Indian black (William A. Ward) as well as James R. Starkey, orator of the day. (It was held at) Tuolumne picnic grounds, called Billy O'Hara's Place, there were about one hundred people, many of whom had arrived in handsome carriages.(Tuolumne Courier, 6 August 1859)
(This could be the event that O'Hara thanked the people of Tuolumne County for not causing amy problems with their gathering.)

From the July 1860 Census
Blacks listed as a barber.
and details from other documents

The association of the black men and the razor goes back to 1820 when they controlled the profession of shaving and hair cutting. As late as 1884, Chamber's Encyclopedia of New York stated, "In the United States the business of barbering is most exclusively in the hands of the colored population." San Francisco was home to sixteen black-owned barber shops as early as 1854, and during the 1860s, a former slave named Peter Briggs enjoyed a monopoly as the sole barber in Los Angeles. The owners of the following buildings with barber shops are not conclusively the barber. They rarely state that the owner is the barber. We can safely assume that many of Columbia's early barbers were black.

1859 Black Barbers, James Barker, age 32, from Tennessee (his wife Sophia, 24 years old, from Illinois, was a dress maker) and J. A. Cousins, 32 years old, from Virginia (his wife Justine, 21 years old, from New York) open a Shaving Emporium in the third building above Fulton Street on the west side of Main (the Temple Building).

1859 July - J. A. Cousins advertised as a barber. 1859 J. A. Cousins leaves the shop with James Barker and locates in the frame building south of the Wells Fargo building.

1859 - Richard Henderson from Virginia, a black barber, (not married) was in a shop on Fulton Street where Barker joined him. He received some notoriety when his brother William Hendreson rescued a Columbia woman from a shipwreck they both happened to be aboard. She wrote a very grateful and sentimental letter to the paper.

1860 census Ried Henderson a "Mulatto" age 40 from Virginia. (P62-L7) R. Henderson operating a Barbershop on the South side of Fulton west of the Water Co. office. A colored. Was joined by James Barker until his death in Nov. 1860 from consumption. (Eastman 1:16:21)

Other Blacks in Columbia
1860 census


Comment: Five or so years later (Civil War ended April 1865) this census shows a huge loss of Blacks living in Columbia. Without checking Sonora census, I decided to check on a community within California that started earlier in Los Angeles. Many Blacks headed there.

1872, the First African Methodist Episcopal Church was established in Los Angeles when emancipated Blacks began moving to the city in significant numbers towards the end of the Civil War. In 1885, the second Baptist Church for African Americans was built.


5th July 1870 on first page of census at bottom for Columbia, states: 3 colored males and 1 colored female, however there are no references to any Blacks on this page. Interesting twist. The census taker for Columbia called all Chinese "Colored" and and all the names for "Whites" were reversed (last names are listed first, except the Chinese)