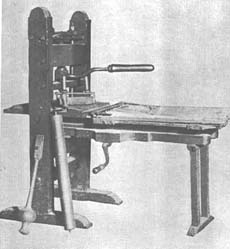 The legend and the facts about this relic are interesting to sort out. It was nicknamed as many times as it was transported from one place to another. Lagoda Press after the ship that brought it from Hawaii to Monterey (Hoyt: 201). The Zamorano Press for the Spaniard-Mexican printer, Augustin V. Zamorano, who purchased it. The California Ramage, Mexican War Press, Old Monterey Press, Old Monterey War Press, and other variations of these names by different authors.

Record's show that on May 20th 1833 the Ramage was purchased by a ship's purchasing agent (Captain Thomas Shaw of the Pocahontas) in Boston for a missionary group in Honolulu, Sandwich Islands. It was already a used and worn press when it arrived. It did have some type that had been produced by the Boston Type and Stereotype Foundry. (Bretnor forward in Kemble:15). The Hawaiian paper had already bought another press and so sold the Ramage press to the government of California.

Zamorano is also mentioned as the purchaser ($460) in California as well as the first printer. No record shows, which type, came to Monterey although others mention that the press had bourgeois Type. It arrived sometime between June and August 1834 (Hoyt: 200). Kemble believed wrongly the year was 1832 (Bretnor forward in Kemble:15). The first known printing was a small single sided sheet, "Notice to the Public."(Aviso al Publico) Near the bottom was printed, "Monterey 1834." The press supposedly printed a few government documents and maybe some official papers. Zamorano returned to Mexico by 1834 or 1835 (Wheat: 4)
The press was supposed to have printed "Mariano Chico's" (Alvarado's) proclamation of solidarity with Mexico's fight with Texas in 1836. (Kemble: 53-55)

General Vallejo moved the press to the northern Military Department of Province at Sonoma (Sonoma Barracks?) where it was stored for some time. (Hall: 625)

It was moved back to Monterey in 1842 and stored in the Customs House(?) (Wheat: 4)
Two weeks after American's occupied California in 1846, the Ramage printed the first newspaper "between Oregon and the Equator", on August 15, the Californian. (Kemble: 57) Set up in the barracks as part of the pacification program. (Kemble: 13, 64) The editors were; a chaplain from the U.S. Frigate Congress, Walter Colton and Doctor Robert Baylor Semple. (Kemble: 55) The first issue (August 15, 1846) was on an 11-3/4 by 10-1/4 inch sheet; one side English and the other side Spanish. A shortage of paper caused the printers to search for a substitute. "None could be found except what is used to envelope the tobacco smoked by the natives." (Colton's; Three Years in California, via Kemble: 57)
Colton left the newspaper, as its main writer, April 24, 1847. (Kemble: 63)

The Press and paper were moved to Yerba Buena after publication of the May 6, 1847, issue. These papers printed the advantages of living in Benicia. The Californian was in competition with the California Star, which was printed by Mormon interests; Samuel Brannan and Edward C. Kemble. (Kemble: 10) They Used an R. Hoe & Co. press and their first issue was January 9, 1947. (Kemble: 68)
The gold rush halted these papers for many weeks and the Californian didn't start up again until July 15, 1848. (Bretnor forward in Kemble: 28) When the two papers merged, (Star & Californian - soon to be called the Alta California), the Old Press was sent to Sacramento.

The Ramage was shipped in 1849 to the new town of Sacramento City aboard the sailing ship Dice mi Nana. Off loaded at Webster, below Sutterville and carried overland to Sutter's Fort. A makeshift newspaper office was set up in an open roofed adobe, located outside the walls of the fort. The first issue of the Placer Times appeared April 28, 1849. It measured 13x18 inches. "bearing a crude heading carved with a jack knife from a handy piece of wood." (Kemble: 137) The editor was Edward C. Kemble. Fact is he did the whole thing alone. In July 1849 the press went to the City Hotel, Sacramento City. It made another move within the city.

The old press was moved back to San Francisco in late November or December of 1849. (Kemble:169) The publishers of the Alta California wanted to preserve the Old Press and build a museum for it. However an Englishman, H.H. Radcliffe, convinced the owners to sell the press to him, in January 1850. He wanted to start a newspaper in Stockton. They sold it on the condition that it could be repurchased when the owner bought a more modern press. (Kemble: 169)

Radcliffe's paper was the Stockton Times and Tuolumne City Intelligencer from mid 1850 to April 1851. The newspaper was destroyed by fire that April and somehow the Ramage escaped this first attempt on its ancient structure. The press was then passed on to the Sonora Herald. (Kemble: 179)

The Sonora Herald was first published in Stockton July 4th, 1850. Then a few days later it was transported to Sonora. Apparently the "original" type was still being used. (Wheat:10-11) The "first seven numbers printed on Foolscap, and were sold for 50 cents a copy." (Heckendorn: 37)
"Sunday, August 11, 1850 - On Wednesday afternoon, July 3, after having worked off the first edition of the Sonora Herald in the (Placer) Times office at Stockton, the proprietor solicited me to take horse and start immediately for Sonora, seventy-five or eighty miles distant, in order that the papers might be distributed.....we have but two or three cases of old type, a wooden "stick" manufactured by my own hands with a jackknife, and a Ramage press." (Christman: 169)

By Oct 1851 the press was sold by Dr. Gunn, owner of the Herald, to George Washington Gore and moved to Columbia. The first issue by Gore as editor was called the Columbia Star and was dated October 25th, 1851. "The first copy that was struck of this paper, sold for an ounce, and is now (1856) in the possession of Mrs. DeNoielle." (Heckendorn: 7)
Gore couldn't pay the balance of $360 for the press and a sheriff's sale gave it back to Gunn, November 12, 1851. The press had then been disassembled for transport and the largest part left on the porch, over night. This portion had been dragged into the street that night by unknown vandals and set on fire. The damage was minimal and it survived its second attempt on its old structure. The Sonora Herald printed a nasty story about the total destruction of the press while the citizens of Columbia cheered. The reality was that it eventually went back to Sonora.

The charred frame of the press was brought back to the office of the Sonora Herald and put on display. The intent was, it would be held until a museum for California was constructed, and it could have a place of honor. Alas the end of the Old Press was actually in Sonora as Kemble noted, "the Ramage had been lost in one of the many Sonora fires before 1858." (Kemble: 184)

Details on the Columbia Gazette