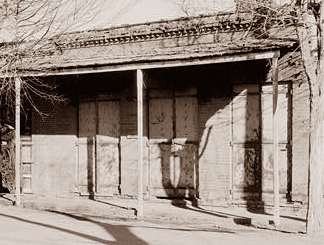 Clementine's Diary gives unique insight regarding the life of a merchant in California’s goldrush as well as the perspective and details of a woman of the 1850’s. Her comments about the church leaders and views on community happenings are also interesting. The second Brainard House was located just across the street from the North Methodist church.

See her comments on Churches of Columbia page. B. M. Brainard, as well as two other family members: Rueben and Mary, are buried in the Columbia Cemetery.

1850 August 3 - Benjamin M Brainard is listed in the census as a clerk in East Monmouth, Maine.

1851 September - Benjamin M. Brainard took up two lots on south side of Fulton (2d and 3d lots from Broadway) west lot used as a warehouse and east lot used as their wood frame wholesale grocery house.

1852 Early partnership dissolved and took W.H. Newell as partner. Acquired a house on west side of Broadway four doors south of Jackson Street.

1853 January 8 - Brainard and Company run an ad in the Columbia Gazette.

1853 October 15th - Clementine A. H. Brainard arrives in San Francisco with her husband, whom she calls Marcellus.

1853 Oct 16th - Benjamin Marcellus Brainard has gone to San Francisco for supplies. (This is among the many trips a merchant did to save in shipping and lower the prices for the Columbia customer.)

1853 December 17th (Sat.) - "Marcellus commenced trading in a store on Main Street: has commenced with the intention of having a Temperance Store, and may be come to the determination soon that by the help of God he will be dealing no intoxicating drinks whatever may be felt that it is not good for his soul if it is for his purse." (From Clementine Brainard's Diary)

1853 December 18th (Sun.)- "Marcellus was obliged to be in the store: I do hope that the merchants will decide soon to close their stores on the Sabbath and then we may hope for reformation in Columbia." (From Clementine Brainard's Diary)

1854 February 16th, Thursday - "Have almost had the blues today at the thoughts of staying alone a fortnight. Marcellus left for San Francisco this evening."(From Clementine Brainard's Diary)

1854 April 14th, Friday - "Marcellus returned from San Francisco this evening." (From the diary of Clementine Brainard)

1854 May 23rd, Tuesday - "Marcellus left this afternoon for San Francisco, will be gone ten days."

1854 June 5 - Agreement between Benj. M. Brainard and Franklin & Wolfe; Brainard hereby agrees to permit Franklin & Wolfe to build the wall of the building they are about to erect on Main Street, 4" upon his ground. He also agrees to give them a deed to the ground back of their lot, running 19' back and 11' wide, and also will pay them $125 when the wall is completed with the understanding that he is to be half owner of said wall, and to have the privilage of putting his timbers thereon, and to have equal rights thereto with Franklin & Wolfe, he being about to erect a brick building on the south next to theirs. - (Eastman - Volumne 7 - 727 Columbia Deeds & Claims, pg 28)

1854 July 10th - "...a fire broke out about half past two, and before sunrise the entire town with the exception of a few buildings was reduced to ashes, our house and store are both burned; they saved a part of the goods at the store, and most of the things at the house; our house was the last building burnt." (From Clementine Brainard's Diary)

1854 August - a one story brick building is constructed with a common wall of the Franklin & Wolfe Building. For a few months it is the home of the Wells, Fargo office. Brainard also sells groceries and provisions.

1854 September 9 - Marcellus moved into the brick store on Main Street with the common wall of the Franklin & Wolfe building, then rented the old one (the one facing Fulton St.) for a carpenter's shop.

1854 November 14 - "Marcellus returned from San Francisco this evening had had a very pleasant time, has not had the chills since he left home; he bought me a dress, breast pin, bureau, carpet etc. etc. all very pretty indeed. He has had very good taste in the selection of all the goods he brought to the house." (From Clementine Brainard's Diary)

1854 December 7th - The Brainards move into their newly built house on the site of the burned one; north-west corner of Green & Broadway Streets.

1855 January 14th - Sunday "The Merchants all came to an agreement to close their stores on the Sabbath, but today most of them have opened, it seems too bad. I do hope they will never be guilty of this offence again but am afraid they will." (From Clementine Brainard's Diary)

1855 Brainard and O.H. Huntington ran a furniture store in the Fulton Street store.

1855 May 2nd - "Marcellus returned from San Francisco tonight - did not expect him so soon." (From Clementine Brainard's Diary)

1855 August 26th - B. M. Brainard's second child is born; Francis Amelia in the same house as Charles their first son.

1855 October 22nd - "Marcellus returned from San Francisco tonight, which was quite unexpected." (From Clementine Brainard's Diary)

1855 November 6th - William H. Newell and wife mortgage to B. M. Brainard for $1235.00 for a parcel of land and a brick building on the north side of State St. next east of the two-story brick of Dr. James McChesney. (See also Duchow Building.)

1856 B. M. Brainard runs an ad in the Businessmen's Directory.

1856 David Parker's Shoe, Saddlery and Harness store is in the building.

1856 June 29th - Benjamin Marcellus Brainard dies of a fever at age 30 yrs and 7 months. Buried in Columbia cemetery. His wife Clementine becomes the owner of all his properties.

1857 Clementine Brainard (wife of B.M. Brainard) continues with store with help from family members. (See the property of 1857)

1857 April - C. B. Rendall occupied the building with a Dry Goods business.

1889 Not sure when the building collapsed or was dismanteled.

1900 By this time Charles Koch owns the property.

1976 Jeanne Peterson Link is given a one year contract and opens a Portrait Studio in the Brainard ruin. (Park & Concessionaire report 1975-76) 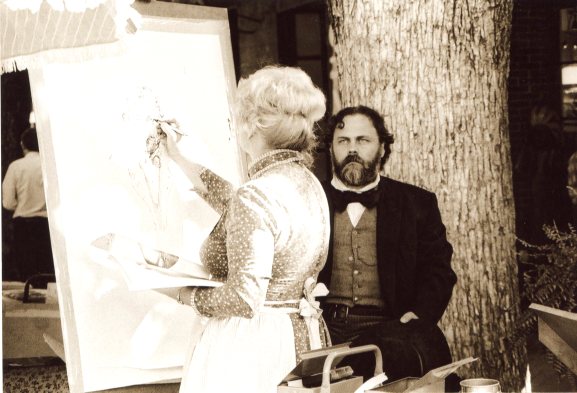 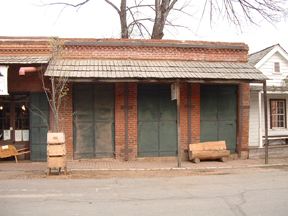